The rapid PCR testing facility established at the Bandaranaike International Airport (BIA), which was to kick off yesterday, September 25, has malfunctioned due to a technical failure in the system, Tourism Minister, Prasanna Ranatunga said.

He said that the PCR testing facility was scheduled to function for tourists from yesterday but unfortunately, the system encountered a technical fault.

After addressing the fault, PCR tests will be done in a day or two, the Minister also said.

Moreover, the Minister denied the chaotic situation which was reported at the airport today, where tourists were alleged to be sent to hotels for quarantine, instead of allowing them to take the rapid PCR test.

“The tourists who are scheduled to visit the country have made the pre-bookings for accommodations such as hotel facilities, transport, PCR tests etc. The tourists who landed yesterday with their pre-booked arrangements were dispatched to the hotels. The tourists who were not subject to PCR tests at the testing facility at the airport were sent to hotels,” Minister Ranatunga said. 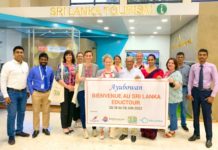