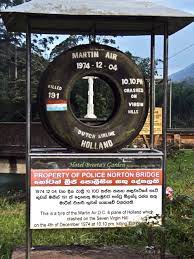 On the night of 4th December 1974 at approximately 1641 UTC a Martinair DC8 55F aircraft, on
descent into Colombo, hit the fifth hill of a range of hills known as Anjimalai in a Tea estate
called Theberton at Maskeliya, Sri Lanka. The official report stated what happened and the
probable cause but did not dwell much on the ‘Human Factors’ that led to the accident which
killed all 182 passengers and 9 crew on board. They were on their way to Mecca.
A short summary of the official accident report is as follows:

Bogawanthalawa and Agrapatana, and to all appearances the engines sounded normal and
there was no evidence of any fire on board during the flight. The sound of the aircraft exploding
on impact was heard clearly by residents close to the site of crash and subsequently it was
discovered that the aircraft had crashed into the 5th mountain on the range of hills called
“Anjimalai” at Maskeliya, with fatal injuries to all on board. The aircraft was completely
destroyed consequent to the impact.

Sepeated attempts by Approach Control to establish contact with the aircraft met with no
success, and in consultation with Area Control Colombo the distress phase was initiated, search
and rescue operations being organized subsequently.

In the early years of Aviation the aviators were the supermen and aircraft were unreliable.
However aircraft developed rather rapidly, thanks to the two Great Wars and became more
reliable, while the human condition remained the same from the beginning and was subjected
to fallibility. In time, the experts agreed that the ability to make mistakes and intelligence were
two sides of the same coin. When considering the Man/Machine interphase the man was
subject to failure more frequently and in unique ways than the machine. The term ‘Pilot Error’
was commonly used to describe the cause of an accident.

It was developed from the original article 26 of 1944. Without question this was a
landmark in terms of international cooperation in accident investigation. The Manual of Aircraft
Accident Investigation developed from these recommendations outlines the objectives. “It is
essential that all those concerned with an accident investigation should appreciate that the
object of the investigation is to save lives and damage to property in the future by ascertaining
the real causes of the accident and that the inquiry is not being held simply to find the culprit or
assess blame.” It goes on to say “ An accident investigator is neither authorized nor required to
arrive at findings of “guilty” or “not guilty” his duty is to discover all relevant facts and he has
no obligation to fix the guilt, apportion blame, or recommend punishment. This was a step in
the correct direction. Many felt that there was always a cause behind the cause. It was Cicero
who had said over 2000 years ago that “to err is human” These human factors were not
acknowledged. It was spoken about in ‘hush hush’ tones by a few and for all practical purposes
did not officially exist.

Ironically, the term ‘Human Factors’ in Aircraft accidents was invented by David Beaty who was
born in Hatton, close to Maskeliya in Ceylon in 1919 and was a son of a English Methodist
Minister. He joined the RAF in WWII, became a British Overseas Airlines Corporation (BOAC)
Captain, Studied Psychology and became a prolific writer of aviation stories. One of his books
called ‘The Cone of Silence’ was made into a film and another book called the ‘Temple Tree’
was a story of an air crash in Mineriya Sri Lanka very similar to the Martinair 138 at Maskeliya.

Through the years the accident investigators called ‘Maskeliya’ type of accidents ‘Controlled
Flight Into Terrain ‘(CFIT) where a perfectly serviceable aircraft under the control of a fully
qualified crew hits terrain, water or an obstacle with no apparent awareness of the crew.
Statistics show that to date there have been over 9000 deaths due to CFIT and still remains a
recurring problem. In 1974 the National Transportation Board (NTSB) USA mandated that a
terrain awareness device such as a Ground Proximity Warning System (GPWS) be fitted on all
American registered aircraft. The International Civil Aviation Organisation (ICAO) took another
five long years to mandate the same. So would it have saved the Matinair DC-8? Probably not,
as the early systems used an onboard Radio/Radar Altimeter which was directed downwards
towards the ground and would have been useless in giving an immediate warning when
approaching a sheer cliff as it was the case on hill number five of the Anjimalai Range. It was
only in 1996 that that this blind spot was eliminated by coupling a Global Positioning System
(GPS) Map to provide lateral guidance to the pilots.
After two major crashes in USA in 1972 (Eastern 401) and 1978 (United 173) United Airlines
started conducting ‘Human Factors’ awareness programs for Air Crew and called it Crew
Resource Management (CRM). It could be applied in a wider sense “in both its knowledge base
and scope. Human factors involves gathering information about human abilities, limitations,
and other characteristics and applying it to tools, machines, systems, tasks, jobs, and
environments to produce safe, comfortable, and effective human use. In aviation, human
factors is dedicated to better understanding how humans can most safely and efficiently be
integrated with the technology. That understanding is then translated into design, training,
policies, or procedures to help humans perform better.” It was only the tip of the iceberg.
Other airlines including KLM which owned Matinair followed suit and arguably air safety
improved in the years to come
It is now mandatory that all pilots should undergo CRM training and are continuously evaluated
on the possession of these ‘soft skills’. A psychological review is also compulsory.
Looking with hindsight at the accident report compiled by Eng. Donald J Rosa on behalf of the

Director of Civil Aviation Sri Lanka, It is observed that the Captain of the Martinair 138 had
26770 hours flying experience 4000 hours of which were on the DC 8 while the First Officer had
only 2480 hours experience 47 of which was on the DC 8. To me it is obvious that the intra
cockpit (flight deck) authority gradient was far too steep between the captain and the First
Officer. The Captain was a highly experienced war veteran while the First officer was still wet
behind his ears by aviation standards! Airlines have now identified this as a possible problem
area. For instance, if the Captain made a mistake will the First Officer point it out? Or will there
be a natural assumption “I am sure the old man knows what he is doing. If I point it out he
might snap back at me and it will be embarrassing. So I better say nothing” Post 1978 copilots
were encouraged to be ‘assertive’ and the Senior Captains are instructed to set the working
environment right for the juniors to query his actions if necessary. That can be fixed by a good

captain on his initial briefing saying “please feel free to query anything that I do, even at the risk
of being embarrassed and I shall do the same”

The estimated time of arrival (ETA) and the actual time of arrival at the entry to the Colombo
Flight Information Region (FIR) differed by 6 minutes. If there is a difference of a maximum of
three minutes the pilots should call Colombo Radio on High Frequency Radio and updated
(revised) their estimated time of arrival (ETA). This was not done. The DC 8 had on board a
navigational instrument which works on the Doppler effect of reflected signals from the
ground. However when the aircraft flies over the sea it goes into a ‘sea state’ as the reflections
off the smooth sea are not too good. It works out the time and distance to go using the last
reliable signals assuming it maintains the last memorized ground speed. There was something
wrong with the Doppler digital counter in the Martinair flight as well. In the absence of reliable
instruments the pilots carry out a navigation method known as ‘dead reckoning’ based on the
last calculated ground speed and distance to run. Again, it is confirmed that they got their top
of descent wrong. They did not have GPS on board (Invented but not available to civil aircraft).
In human factors studies this is now labeled as loss of ‘Situational Awareness’. Quite simply
what was going on around them.

When one is unsure of one’s position the onboard Weather Radar could be used to map out
significant terrain such as the South East coast. By tilting the antenna downwards the pilots
could have known exactly how far from the coast line they were. Because of the nonstandard
range markings on this particular aircraft when compared to the other KLM aircraft, mistakes
could have been made. The flight crew should have used all methods available to them as a
crosscheck. Did they get fixated only on one instrument?
To quote Capt. Dhamseth Pallewala a senior instructor pilot and former Manager CRM of
Emirates Airlines “when one considers the resources available to Mr. Rosa. His analysis of the
Doppler system is particularly impressive, and in my opinion his conclusions as to the primary
cause of the accident are spot on.”
Unfortunately the BIA in Katunayake was critically deficient in 1974. It had no reliable homing
device. The ‘KAT’ non directional beacon was the only radio aid to Navigation that was
available. When there was a thunder storm in the vicinity the needle in the aircraft points in
that direction. Some days the ‘Radio Ceylon’ Transmitter was emitting a stronger signal. The
more accurate Very High Frequency Omnidirectional Radio-range (VOR) was ‘on test’ basis and
there was no collocated Distance Measuring Equipment (DME). No instrument landing system
(ILS). There was no way that the Air Traffic Control Officer could have known that the DC8
started its descent at the wrong distance out from BIA as he had to depend solely on the
information supplied by the flight crew. For the crew that night the ‘chips were down’ and they
were not aware of it.

Interestingly Air Ceylon was operating safely in and out of BIA in a state of the art HS 121
(Trident Jet aircraft) during this time. That aircraft had the same navigational equipment as the
DC 8. The redeeming factor was that the crew had local knowledge of the pitfalls like the high
ground on descent from the east and the inadequate airport facilities. Martinair was a charter
operation and the pilots were not familiar with the airport. Immediately after the crash all
operators from the east would come overhead at 10,000ft and then circled to land. So one
recommendation of the report was that the Crew should have had a familiarization flight. This
was not practical or cost effective in a charter operation. However in this day and Information
Technology age, abundant video footage of all airports are available in house at all good airlines
and the paper work that they have self-briefed is (just in case!).
This writer believes that this crash was a wakeup call for the Sri Lankan Authorities to install a
flight calibrated VOR and DME, an ILS and above all a RADAR system before the impending Non
Aligned conference of 1976. 191 passengers and crew may not have died in vain. It certainly
gives credence to the saying that “To have progress in Air Safety, blood must be spilt” 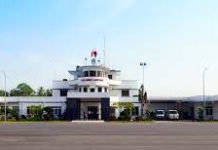