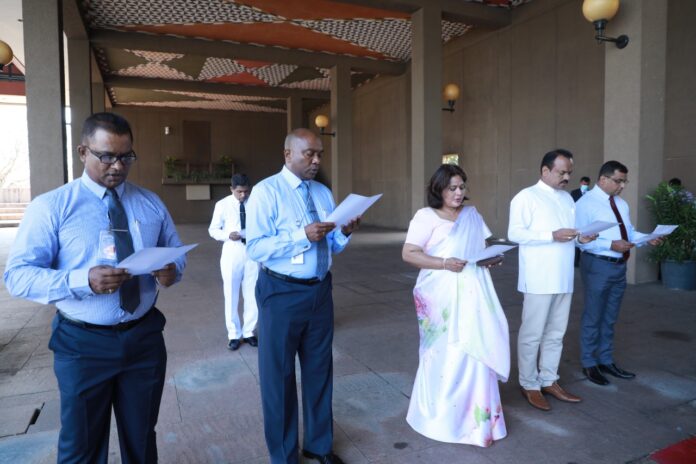 Let’s line up this new year undertaking responsibility to fulfill the expectations of the people amidst all the challenges – Hon. Ajith Rajapakse, Deputy Speaker states joining the occasion of the commencement of duties for the new year

Addressing the Parliament staff for the year 2023, Hon. Ajith Rajapakse, Deputy Speaker stated today (02) that during a time when we have to face more challenges than ever, as employees of one of the highest institutions of the country, we should line up this new year undertaking responsibly to fulfill the expectations of the people.

The Deputy Speaker stated the above at the Oath / Affirmation of the public service event of Parliament for the year 2023 held at the Parliamentary complex.

The Hon. Deputy Speaker pointed out that after overcoming the challenge of Covid, the nation had to face the economic crisis and accordingly, the public servants have a huge responsibility in order to overcome the existing difficulties. The Hon. Deputy Speaker also pointed out that government employees have a great responsibility towards the people in a more challenging environment given the background where a large number of public servants are retiring at once.

Following the hoisting of the National Flag by the Hon. Deputy Speaker at the main steps in front of the Parliament Building, the Parliament the Oath / Affirmation of the public service event was initiated in a charm manner.

A two-minute silence was observed afterwards to commemorate all those who sacrificed their lives for the country, including war heroes.

The Parliament Staff proceeded forth with the Oath /Affirmation of the public service for the year thereafter.

Addressing the staff, Ms. Kushani Rohanadeera, Chief of Staff and Deputy Secretary General of the Parliament stated that to save the country from the existing difficulties, we must work with maximum efficiency even in a challenging environment. The Deputy Secretary General emphasized that many new committees are to be established in Parliament and accordingly, in a background where recruitments and financial allocations are limited, we should work as one family with more commitment.

The Deputy Secretary General also expressed her gratitude for the contribution of the parliament staff towards the smooth running of parliamentary affairs during the COVID challenge.