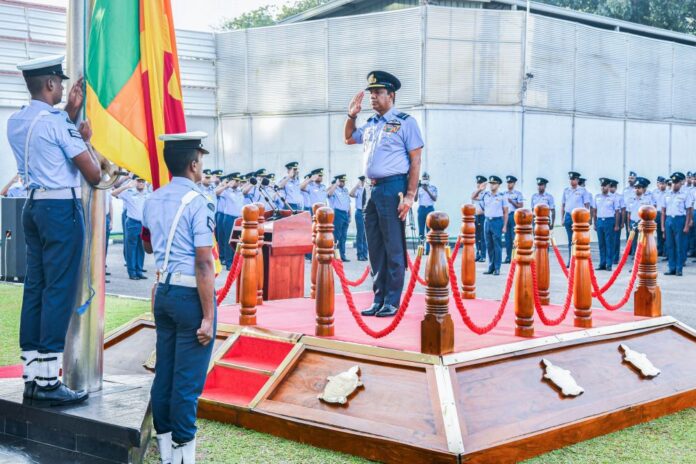 The Commander of the Air Force, Air Marshal Sudarshana Pathirana delivered his New Year’s address to the Air Force Board of Management, All Officers, Other Ranks and Civilian Staff of Air Force Headquarters, SLAF Station Colombo and all Air Force establishments today (02 January 2023) at the first working day of the year 2023.

The Commander commenced the speech by extending his warm wishes to all members of the SLAF and their families. The Commander highlighted the SLAF’s tremendous role in tolerating the challenging situations arisen in the last year, emphasizing that such challenging times paved ideal breeding grounds for innovation, novel thinking and revolutionizing traditional operational models. In order to reap success even in such adversity, one needs to inculcate determination, dynamism and the ability to resist the inborn fear of change, thereby having the courage to venture outside one’s comfort zone.

Furthermore, he urged all members to use the best judgment and ingenuity in carrying out tasks, keeping in mind that the most important duty is to protect this country’s sovereignty, territorial integrity and independence by upholding the constitution.  Meanwhile, he emphasized the inaugural “Eagles’ Mega Draw” which was held last year to provide financial relief to Air Force service personnel. Then, the Commander of the Air Force rewarded the grand prize of Rs. 2.5 million to Leading Aircraftman Sepala MYSK, the second prize of Rs. 1 million to Sergeant Kumara DAW and the third prize of Rs. Half million to Flight Sergeant Pushpakumara HMN today.

The Commander insisted that the SLAF will uphold its responsibilities to the nation and the national security in order to confront the new challenges in the new beginning.  A multi-religious ceremony was also held at Air Force Headquarters to invoke blessings on the SLAF and its personnel.