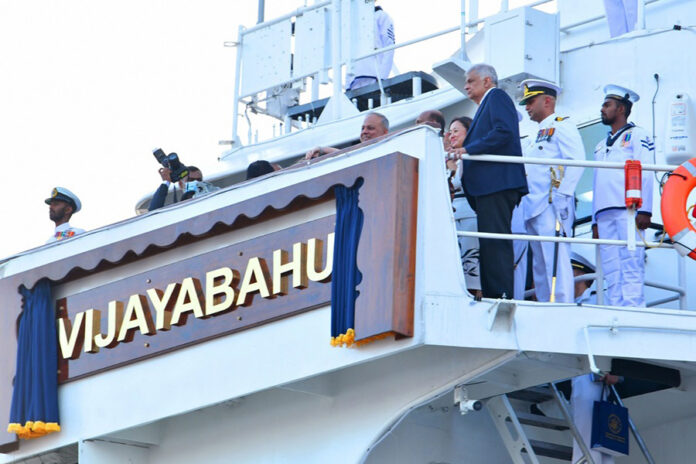 The Offshore Patrol Vessel P 627 the most recent addition to the Sri Lanka Navy fleet acquired from the United States (U.S.) Coast Guard was commissioned as Vijayabahu under the patronage of President Ranil Wickremesinghe last Tuesday (22).

The commissioning ceremony was held at the Colombo Port.

The President as the Chief Guest was accorded a Guard of Honour by the Sri Lanka Navy. The President boarded the, SLNS Vijayabahu Vessel accompanied by Navy Commander Vice Admiral Nishantha Ulugetenna and unveiled the ship’s name board.

Following a cultural show at the ceremonial sunset, President Ranil Wickremesinghe and other dignitaries posed a group photograph.

P 627, the second ‘Hamilton Class High Endurance Cutter’, received by SL Navy, measures 115m in length and is capable of reaching a maximum speed of 29 knots with 14000 nautical miles of endurance at cruising speed. Further, she has been designed for 187 crew members and is equipped with modern weapons and machinery that suit SL Navy’s operational requirements. During her stint with the U.S. Coast Guard the ship has rendered an exceptional service by curbing illegal fishing, illegal immigration and seizure of a large quantity of narcotics in U.S. waters.

Upon taking charge of the ship, the initial crew of about 130 naval personnel under the supervision of the Commanding Officer designate of P 627, underwent training and engaged in acquisition formalities, maintenance, scheduled repairs and installations to suit the operational needs of the SL Navy, for about 10 months. Soon after training and modernization work, the P 627 began her home-bound journey on the 03rd September 2022.