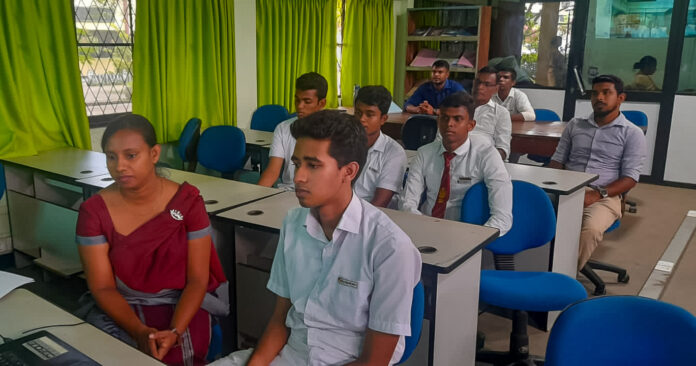 The Parliament of Sri Lanka has expressed its support for the installation of the electronic voting system in student parliaments operating across the country.

As a start, an awareness program was recently conducted by the Parliament of Sri Lanka on the use of the electronic voting system for the student parliamentary election held at the Eheliyagode National college.

A number of senior officials of the Parliament of Sri Lanka participated in this awareness program, which was titled “Assistance for an Electronic Voting System in the Student Parliament”, where students and teachers also had the opportunity to present their ideas and suggestions.

It is accepted by modern electoral experts that by using an electronic machine for voting, the cost of printed ballots, ballot boxes, etc. can be saved and the labor and time spent on counting the votes can also be reduced. The senior officials of the Parliament explained to the students the information technology measures that can be taken to maintain these e-voting activities without any errors at every stage from voter registration, voting on the election day to the announcement of the final result.

Also, the parliament officials pointed out at this awareness program held that the Eheliyagode National college in Ratnapura district has resorted to using an electronic voting system for its student parliamentary elections this year.

Director (Information System Management) of Parliament Mr. Mahesh Perera and other officers Mr. Narendra Lakmal and Mr. Daminda Willoraarachchi also participated in this program held at online. In addition, the Director (Coordinating Engineer) of the Parliament of Sri Lanka, Mr. Lalith Adhikari, also presented a speech based on his experience on electronic voting in Parliament. Director Legislative Services and Communications, Mr. Janakantha Silva joined the program and congratulated the first Student Parliament meeting to be established at Eheliyagode National college after the election on behalf of the Parliament.