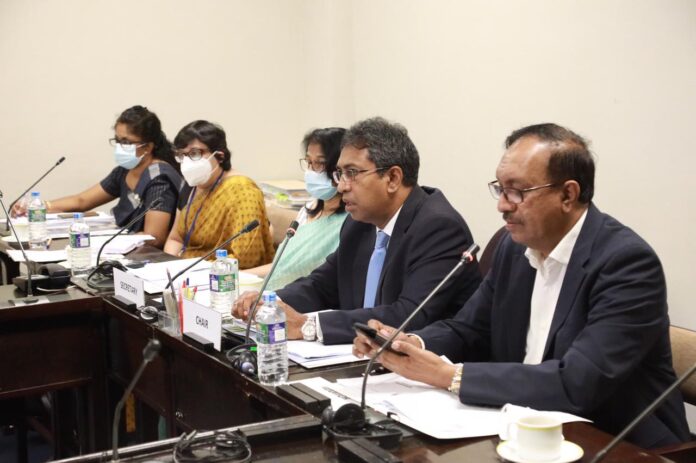 It was revealed at the Committee on Public Finance held recently (10) that a problematic situation has arisen due to the refusal of Samurdhi officials to collect data to prepare a social welfare register, identifying those who deserve benefits with transparency.

This was revealed when the orders of the Extraordinary Gazette No. 2302/23 published under the Welfare Benefits Act No. 24 of 2002 were taken into consideration at the Committee of Public Finance under the Chairmanship of Member of Parliament Hon. Dr. Harsha De Silva.

It was further revealed that it is a proposal of the International Monetary Fund (IMF) to carry out the activities transparently without corruption in the payment of Samurdhi and welfare benefits and accordingly the responsibility for this is assigned to the Welfare Benefits Board. Thus, the orders were published in this gazette for the necessary arrangements for the data collection process.

Accordingly, the Chairman of the Welfare Benefits Board Mr. B. Wijeratne said that Trade unions of Samurdhi Department officers, Grama Niladhari’s and Economic Development officers have informed that they would not carry out the next phase of this programme until measures are taken to amend the section 21 and 22 of the Welfare Benefits Act as even their employment could be lost in the event if the applicants would not reveal their information truly and correctly at the enumeration.

He pointed out that the officers who enter false data are also subject to punishment by this section 21 and 22, thus they have refused to collect this data until those sections are amended.

Acceptance of initial applications to identify suitable individuals/families for receiving welfare benefit payments had recently ended. The Chairman of the Welfare Benefits Board said that mobile application was also introduced to collect secondary data by visiting the houses of the applicants who have applied for welfare benefits.

It was discussed in the committee that nearly 40% of Samurdhi beneficiaries are unsuitable people, as revealed in a World Bank survey. Accordingly, it was discussed that there are some corrupt officials who issue Samurdhi allowance to unfit people and get a percentage of it. It was emphasized in the committee that it is essential to prepare a register with the correct data in order to carry out these welfare benefit payments with transparency.

The committee also recommended that the National Identity Card should be made mandatory in the payment of welfare benefits. The committee pointed out that it is not acceptable that every citizen cannot be given a national identity card in a background where technology is so advanced and it will be an important decision to stop fraudulent activities.

Thus, the committee emphasized the need to solve this problem as soon as possible to create a culture, free from corruption and fraud, as the delay in preparing this register may lead to delay in obtaining the assistance of the International Monetary Fund. (IMF)

Accordingly, the committee which gave approval for this gazette advised the higher officials of the Ministry of Finance and the Chairman of the Welfare Benefits Board to discuss the matter urgently and arrive at a solution. Also, the committee recommended to take decisions related to carrying out these data collection activities promptly by following an alternative method.

Also, Hon. (Dr.) Harshada Silva, instructed the relevant parties to report the progress to the Committee within two weeks.