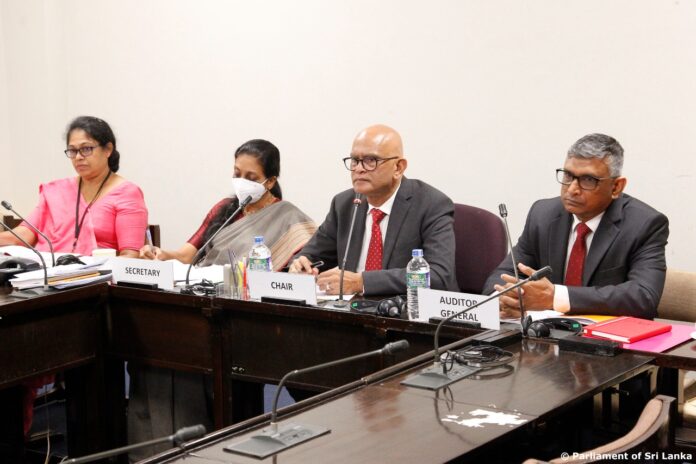 Strong displeasure of the COPE Committee regarding the statement of the Minister of Labor and Foreign Employment with regard to the Auditor General, parliment stated in a press release.

A decision to inform the President

A complaint to the speaker

A special report to Parliament

A decision to re-summon the ministry secretary on the 17th

A special meeting of the Committee on Public Enterprises (COPE) was held recently (05) under the chairmanship of the Hon. Member of Parliament Prof. Ranjith Bandara.

There, attention was drawn to the following three points.

The Auditor General pointed out that, although he stated as a Member of Parliament as well as a cabinet minister, the Committee on Public Enterprises established through the parliamentary system to strengthen the financial control of the Parliament has not exceeded its powers and has not provided any support for doing so.

Furthermore, the Auditor General further pointed out that statements made in a manner that violates the trust of the public sector, public representatives and the general public in the implementation of the tasks and duties assigned to the Auditor General by the Constitution and other written laws are highly harmful to the expectations of parliamentary financial control.

Accordingly, the following proposals and decisions were presented by the committee after a lengthy discussion on this matter.

1. The statement of the Minister of Labor and Foreign Employment is a wrong precedent and the Committee expressed its strong displeasure. In this regard, the Committee decided to express its regret to the Auditor General and his staff.

2. Making a complaint to the Hon. Speaker regarding this statement.

3. Inform the Hon. President in writing about the executive’s interference in the legislative process through this statement.

4. Sending a copy of it to the Cabinet and the the Prime Minister.

6. Tabling of a special report in the Parliament based on the discussion notes of the previous COPE meetings related to the Foreign Employment Bureau.