No 10 Fighter Squadron was founded on 5th January 1996 with the induction of six new graceful tailless delta Kfir C2s based at SLAF Katunayake under the command of Squadron Leader Priyantha Gunasinghe. The Squadron was reinforced in the year 2000 with the arrival of another nine Kfir C2s and C7s enhancing the fleet up to fifteen fighters. The Kfir was developed by Israel as a multirole all weather day night fighter, which satisfied almost all the fighter capabilities of SLAF’s through Battlefield Air Strike, Air Interception, Air Interdiction, Maritime Air strikes with precision and deadly force.

At the outset, the No 10 Fighter Squadron was strengthened with four pilots, four engineering officers and seventy technicians, who were trained by Israel Aerospace Industries (IAI) and instructor pilots from Israel Air Force. The present Commander of the Air Force, Air Marshal Sudarshana Pathirana was first Officer Commanding Operations and succeeded as the second Commanding Officer from 7th of June 2000. First batch of pilots included Wing Commander Janaka Wijayathilake (Retd) and Group Captain Sajeewa Hendawitharana (Retd).

Kfir was the first aircraft to be inducted to SLAF with a Head Up Display (HUD) and a sophisticated Weapons Delivery and Navigation System (WDNS). In addition to the bombload of 5.4 tons, the Kfir has two 30mm cannon guns inbuilt to suppliment its firepower. The Kfir with its formidable firepower and precision targeting, was responsible for neutralizing the greatest number of LTTE strongholds, ammunition dumps, fuel depots, troop concentrations, maritime elements and artillery gun positions effectively reducing the LTTE attrition for ground troops to advance on ground. Since its inception, the Squadron has logged more than 2,800 operational flying hours and has delivered over 3,500 tons of weapons precisely over confirmed enemy targets. Further, with the instigation of precision guided munitions (PGM) Kfirs contributed its effort promptly and effectively, whenever it was called upon with distinction and honour. The results of these efforts were clearly manifested in the nation’s ultimate victory over terrorism in 2009. On 08 March 2009 President Mahinda Rajapaksa recognized the contribution of the squadron by awarding Presidents’ Colours to No 10 Fighter Squadron for its unique and enduring action to eliminate the terrorism, which pestered the Island nation for over three decades.

As it celebrates its 27th Anniversary under its present Commanding Officer Wing Commander Prabath Wijekoon, No 10 fighter Squadron is under a transformation with the fleet upgradation to C12 version, which will expand its limits further with the performance enhancement through highly sophisticated avionics package, navigation and weapon systems.  With these new additions the Squadron would render its service to the nation in the future as the leading fighter of SLAF defending national air space. With the endowing effort and commitment of its professional crew under the guidance of its Commanding Officer, the No 10 Fighter Squadron will continue to thrive in future keeping the Sri Lanka Air Force ensign flying high. 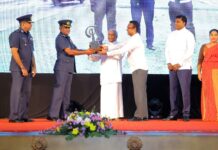