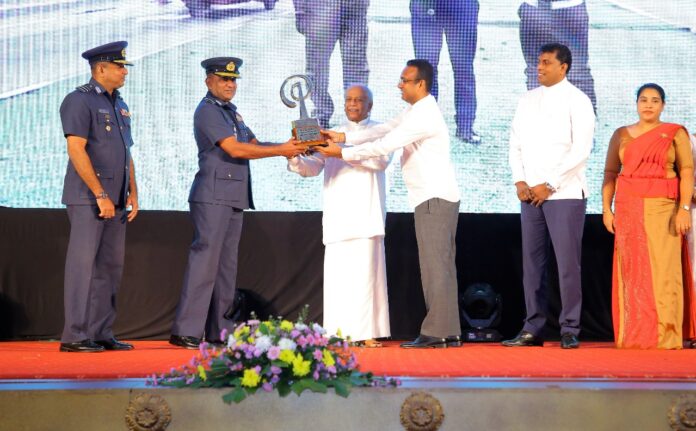 Sri Lanka Air Force secured the Gold Award for the Public Sector – Inter Departments Category at the ‘National Productivity Awards 2020’ ceremony held at the Temple Trees today morning (15 December 2022) and deserved as the first-ever organization in the country to secure the ‘Gold Award’ for the third consecutive year.

The National Productivity Secretariat (NPS), which corresponds to the Ministry of Labour and Foreign Employment, organized the “National Productivity Awards 2020.” This competition recognizes the organizations which have been successful in incorporating productivity concepts and best practices in respective organisations. The purpose of the entire endeavour, as emphasised by the NPS, is to create more effective and citizen-focused government services and to raise the overall productivity of the entire nation. The “Gold Award” in this contest is awarded to organizations that have consistently maintained outstanding methodologies while also previously earning the “Productivity Award” in a certain category.

Whereas winning the “Gold Award” for two consecutive years in 2015 and 2018, the Sri Lanka Air Force applied for the “Gold Award” for a third time this season in 2020. National Productivity Secretariat evaluated the application prepared by SLAF addressing all the criteria required for the competition. The team of audit expertise from National Productivity Secretariat carried out verification visits at SLAF Establishments covering the areas of Operational, Engineering, Training, Research & Development and Welfare. The SLAF participated in this competition as one entity by achieving a higher level of improvement in applying productivity concepts in all the above areas and secured the ‘Gold Award’ for the third time.