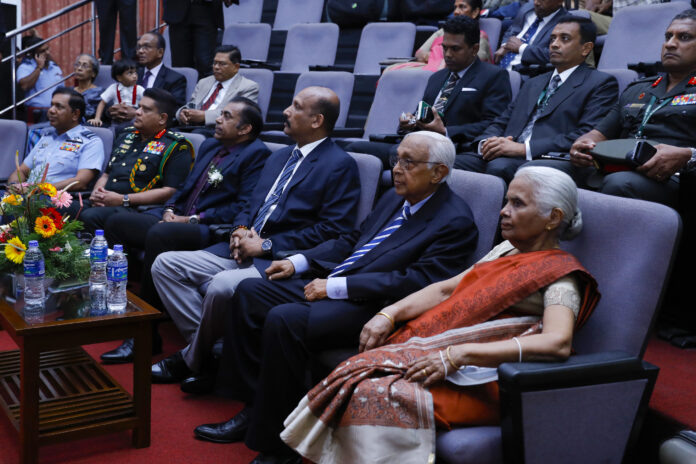 Defence Secretary General Kamal Gunaratne graced the launching of the E Book ‘Prabhakaran’s Ruthless Terrorism in the Guise of a Liberation’ written by the eminent author JF Ranjith Perera at the Sri Lanka Institute of Tourism and Hotel Management auditorium in Colombo last evening (15 Dec).

The Defence Secretary was received by the author on his arrival at the venue.

While speaking to a distinguished audience present at the event, the Defence Secretary said that it is a great honour and a rare opportunity bestowed on him to launch such a marvel of a literary creation in front of such a dignified gathering of heroic personalities who immensely contributed towards liberating our motherland from the cruel clutches of terrorism.

“I feel immensely fortunate to launch this publication which unfolds countless occurrences and naked truths behind many stories on Prabhakaran’s so called endeavour towards a falsified liberation”, he said.

He was appreciative of the author’s initiative and said that very few documented evidence is available which portray the accurate and factual details of the skirmish steered by the LTTE and the great endeavour of the Security Forces towards establishing peace and harmony in the country.

The author, JF Ranjith Perera is a former Director General of the Ceylon Tourist Board and counts over 40 years of executive experience in state and the private sectors in this field.

He has written six books mostly covering post-conflict literature including the one being launched today.

The Defence Secretary presented a memento to the author to mark the occasion at the culmination of the proceedings.