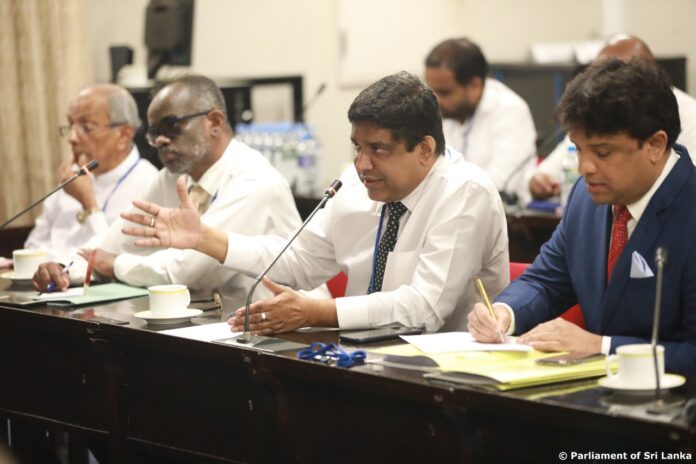 The chairman of National Council sub-committee on identifying short- and medium-term programs related to economic stabilization Hon. Patali Champika Ranawaka recently expressed his regret regarding the fact that the Government of India, the World Bank, the Asian Development Bank, and the Asian Infrastructure Development Bank had given funds to the Ministry of Health, but the government departments have not used it properly to purchase medicines.

However, he also mentioned that the quota given to the private sector under the credit facility has been properly utilized.

He said so when the National Council sub-committee on identifying short- and medium-term programs related to economic stabilization met recently with the aim of discussing the production of Western medicines and Ayurvedic medicines.

The officials of the health sector said that only 50 percent of essential medicines are currently available in this country. They also stated that 6 million dollars are spent annually to import the raw materials required for the production of local medicines. The committee pointed out that this import should be restricted and the efforts to produce the necessary raw materials locally should be encouraged.

Commenting on this, officials of the Medical Supplies Division stated that the amount of essential drugs to be ordered annually under the Indian Credit Line project has been ordered by April this year, and due to the nature of the project, there is some delay in receiving the drugs. In addition to international aid, treasury officials also said that rupees and dollar financial allocations will be provided from the treasury for the purchase of medicines.

A proposal was also presented here that if the State Pharmaceutical Manufacturing Corporation is able to supply the medicines required by the private sector, the country will be able to save some dollars.

Ayurveda department officials said that 130 herbal ingredients required for the production of local and Ayurvedic medicines are currently imported from countries like India and China and about 50 of them are not cultivated in Sri Lanka. They also stated that cultivation of the remaining 80 medicinal plants has been hindered due to land issues and other reasons. But the chairman of the committee pointed out that it is possible to believe that most of those 130 plants can be grown in Sri Lanka.

Chairman of the Economic Stabilization Committee, emphasized that since the price of medicine has increased three times, great concern should be given to pensioners and the other senior citizens. If not, he pointed out that more damage than Covid pandemic could happen in the future.