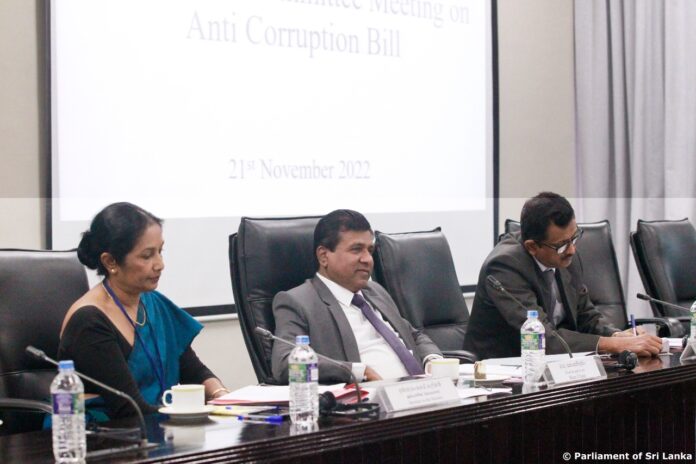 The proposed Anti-Corruption Bill to be submitted to Parliament, inclusive of the establishment of an Independent Commission of Inquiry on Bribery and Corruption which is accountable to Parliament was looked into at the Ministerial Consultative Committee on Justice, Prison Affairs and Constitutional Reforms recently (21).

The Minister mentioned that all the allegations of bribery and corruption in the country are being leveled at the parliamentarians representing the Parliament due to the failure to create a formal institutional structure and provide the necessary powers to prevent bribery, corruption and fraud.

The Bill also proposes to appoint persons with more than 20 years of experience in the fields of law, forensic audit, accounting, engineering, international relations and diplomatic service, public administration as commissioners of the commission. Commissioners are appointed by the President on the recommendation of the Constitutional Council. Furthermore, the allocation of money for this commission should be done directly through Parliament, Mr. Sarath Jayamanna said.

Additionally, the draft has proposed to establish a separate board of directors to receive asset liability statements and deal with related issues. According to the Bill, it was stated that the relevant minister has the ability to make regulations regarding obtaining asset and liability statements of individuals in areas where corruption and bribery occur more, excluding executive officers of the public sector. Mr. Jayamanna also said that since important government departments are connected with this office through the internet, inquiries about assets and liabilities can be made easily.

It was discussed that it includes provisions to prevent bribery and corruption in the private sector, sports sector, etc not only exclusive to the public sector. The Committee also emphasized the need to give severe punishments to those found guilty in the investigation of bribery scams.

The minister also said that he is expected to discuss the proposed Bill in a more democratic manner and make appropriate amendments.

The Minister also briefed the committee on the “The Recovery of Possession of the Premises given on Lease (Special Provisions) Bill to be passed in Parliament. The minister pointed out that the main objective of this enactment is to reduce the laws delay in any ordinary rent and ejectment action in regular procedure and to grant relives to the lessor in very short period.

This Bill introduces a swift and efficient process and an ejectment of overholding lessees who are in occupation if preemies in relation to duly executed notaria lease agreements.

Furthermore, the Order published in Extraordinary Gazette No. 2301/33 dated October 12, 2022 enacted by the Minister of Justice under the Mutual Cooperation in Criminal Matters Act No. 25 of 2022 was also considered and approved.

Furthermore, the Secretary General of the Parliament Mr. Dhammika Dasanayake and a government officials from several institutions including the Ministry of Justice, the Attorney General’s Department also participated in this meeting.