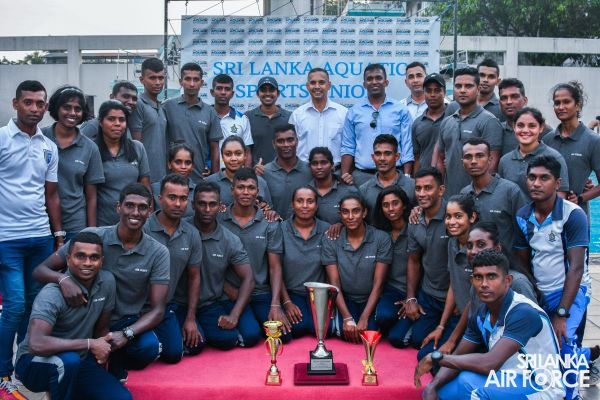 The Sir Lanka Aquatic Sports Union (SLASU) organized the National Water Polo Championship 2022,
which took place from 18th November to 20th November 2022, at the Sugathadasa Stadium Swimming
Pool Complex. The unbeaten Air Force men’s team was able to win the title of National Water Polo
Championship and claimed the trophy after eleven years.
The grand final was held between Old Thomians’ Swimming Club (OTSC) and the Sri Lanka Air Force
team where SLAF beat the OTSC by nine (09) to seven (07) even after the setback in the first quarter of
four (04) to one (01). Leading Aircraftman Udayathra RLK was recognized as the Most Valuable Player
of the tournament while Officer Cadet De Silva UIO awarded as the Highest Scorer of the
championship.
The President of the Aquatic Sports Union, Mr. Nethru Nanayakkara and Chairman of the SLAF
Aquatic Pool, Air Commodore Asela Jayasekera attended the awarding ceremony