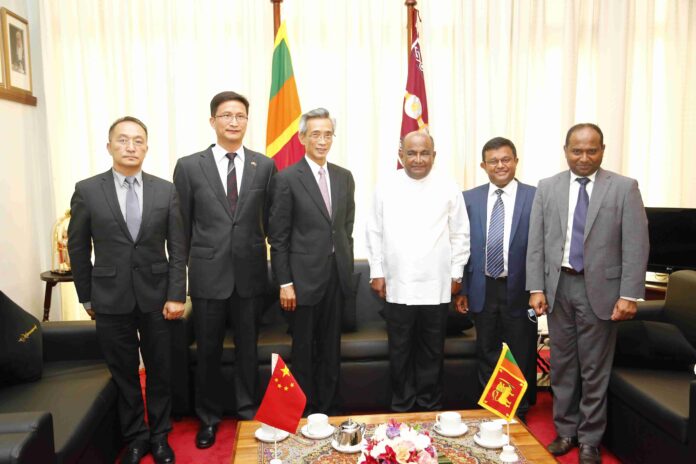 Sri Lanka’s infrastructure facilities, human resources and other required facilities are in place to attract foreign investments – Special envoy of China says to the Speaker

Sri Lanka’s infrastructure facilities, human resources and other required facilities are in place and now what is needed to attract foreign investments is to enact necessary legal reforms President of the Chinese Peoples’ Association for Friendship with Foreign Countries, (CPAFFC) H.E Lin Songtiyan said.

H.E Songtiyan, who called on Speaker Hon. Mahinda Yapa Abeywardene together with the Chinese Ambassador in Sri Lanka H.E Qi Zhenhong in Parliament recently (15) said Hambanthota and other economic Zones as well as the Colombo Port City could attract global investors, if necessary, reforms are enacted and investor-friendly atmosphere is quickly established. He also said that China will provide the highest possible support to Sri Lanka for investments.

Appreciating China’s support as a long-term friend of this country, the speaker said that he expects to strengthen bilateral relations between the two countries in the future as well. Secretary General of Parliament Mr. Dhammika Dassanayake was also present on the occation.

Subsequently, President of the Chinese Association for Friendship with Foreign Countries, H.E Songtian, participated in a special meeting of the Sri Lanka – China Parliamentary Friendship Association.

While addressing the Parliamentary Friendship Association H.E Songtiyan said that the country has all the ingredients such as a strategic location in the centre of Indian Ocean, highways, ports and also skilled youth resources needed for leap forward in industrial and agricultural development.

Here, H.E Songtian also engaged in a cordial discussion with the members of parliament.

After that, the delegation engaged in a tour of parliament and witnessed the parliamentary debate from the Speaker’s VIP gallery.