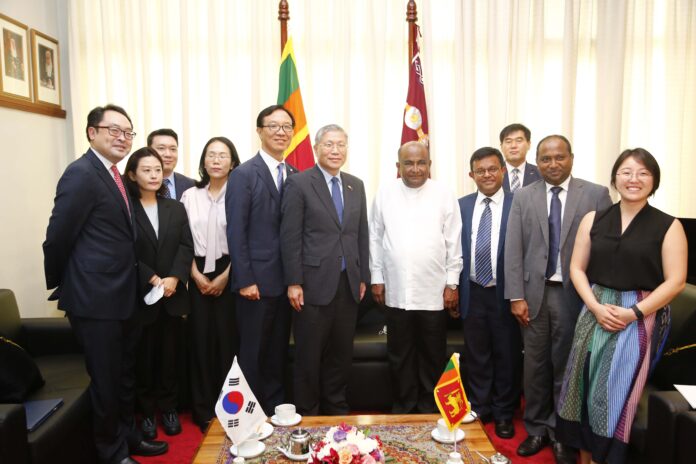 A delegation led by H.E Han Dongman, Special Envoy of the Minister of Foreign Affairs of the Republic of Korea paid a courtesy call on Hon. Mahinda Yapa Abeywardana, Speaker of Parliament yesterday (15) in Parliament.

H.E Han Dongman, Special Envoy of the Minister of Foreign Affairs whilst thanking the Hon. Speaker for being a gracious host during the visit of Hon. Park Byeong-Seug, South Korea’s National Assembly Speaker, extended an invitation to Hon. Mahinda Yapa Abeywardana, Speaker of Parliament to visit South Korea in 2023.

During the cordial discussion between them focusing on several matters of mutual interests, the Speaker of Parliament expressed the intentions of the Government to encourage electric cars and renewable energy sources as a policy.  H.E Han Dongman acknowledging that the world is heading towards renewable energy and environmentally friendly methods stated that the two nations could look into future prospects on the said front in future.

Further discussions also looked at future investment opportunities and increasing the quota for Sri Lankans for the purpose of being employed in South Kora.

The Secretary General of Parliament Mr. Dhammika Dasanayake commenting at this discussion stated that the Parliament as an institution has made significant developments in the recent past. Adding to it the Secretary General stated that 400 school children and representatives of youth were present in Parliament for the presentation of the budget speech for the first time in history expressing the Parliament approach to encourage youth participation in the democratic process.

The cordial discussion between H.E Han Dongman, Special Envoy of the Minister of Foreign Affairs and Hon. Mahinda Yapa Abeywardana, Speaker of Parliament focused on several matters of mutual interests.