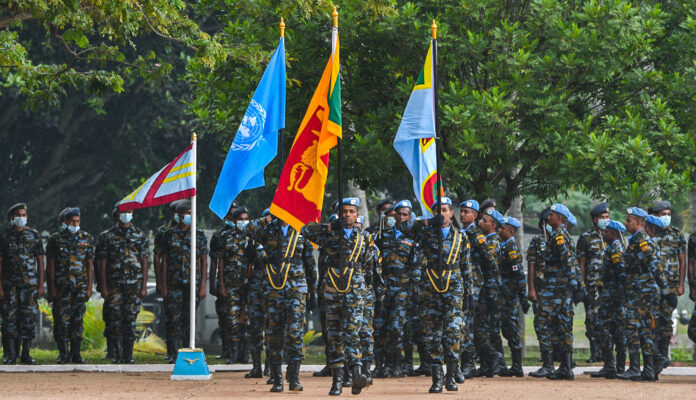 The Pass Out Parade of the No 8 Contingent of Aviation Unit under the United Nations Multidimensional  Peacekeeping Mission in Central African Republic (MINUSCA) was held today (11 November 2022) at SLAF Base Katunayake. The Commander of the Air Force, Air Marshal Sudarshana Pathirana took the salute of the parade which was commanded by Wing Commander Kanchana Liyanarachchi, the Deputy Contingent Commander of the 8th Contingent.

This Heli-deployment comprises of 20 Officers and 89 Airmen which is scheduled to proceed to Central Africa Republic by first week of December.

During the parade three servicemen namely, Flight Sergeant Kumara GH, Leading Aircraftman Jayasooriya WMSM, Leading Aircraftman Darmasiri OAA were honoured with insignia of Load Master by the Commander of the Air Force. The Commander addressed the parade troops where he emphasized that the UN Headquarters has appreciated the Sri Lanka Air Force aviation contingents deployed in Central African Republic owing to display of bravery, service professionalism and devotion to the duty of our service personnel.

This achievement of the Sri Lanka Air Force speaks volumes of the trust and confidence command by the entire military forces of Sri Lanka and would go a long way in boosting the Nation’s image further in the international arena. Besides, this endeavour would bring substantial economic gains to the country as well.

The Parade was followed by a socializing event which was also attended by the Chief of Staff and members of the Air Force Board of Management, officers, other ranks of the 8th Contingent along with their family members.