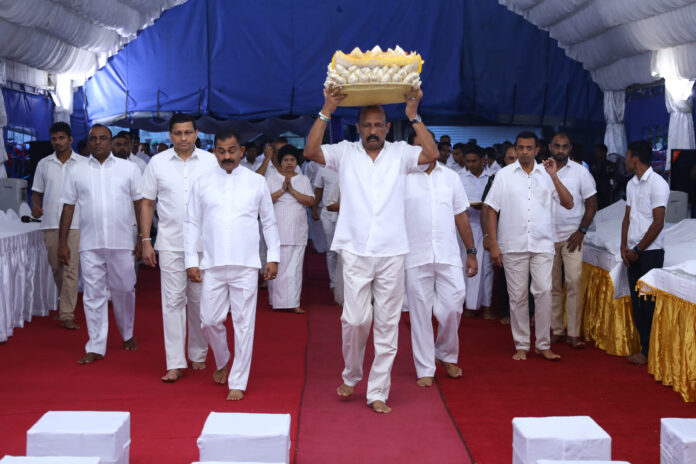 Gen. Gunaratne while paying homage to Jaya Sri Maha Bodhi in Anuradhapura yesterday evening (03) also placed the Katina robes on the upper terrace of the sacred venue to invoke the noble blessings.

Afterwards, the Chief Incumbent of Sri Dalada Viharaya in Kindalegama, Medawachchiya presided over a religious session conducted at the Sandahiru Seya premises during the same evening.

Alms were offered to the Ven. Maha Sangha at the Jaya Sri Maha Viharaya premises today (04) morning and the Maha Sangha performed the religious acts during the occasion.

Offering the highest tribute to war veterans of our time, the Chief Incumbent of Anuradhapura Mirisawetiya Rajamaha Viharaya Most Ven. Ethalawetunawewe Gnanatilake Thero while presiding over the session invoked blessings on the military during the sermon held at the Sandahiru Seya today (04).

Construction of this mammoth revered monument, the ‘Sandahiru Seya’ commenced in 2010 in order to pay the nation’s gratitude to the war veterans who sacrificed their lives and to those who maimed to usher peace to the motherland.

Katina Pinkama ceremonies are performed in Buddhist temples during the period from Vap Full Poya day to Il Full Moon Poya day and this ritual is considered the noblest religious performance which bestows limitless accumulated merit.

The Defence Secretary also paid homage to Acting Atamasthanadhipathi and Ruwanweliseya temple Chief Incumbent Most Ven. Pallegama Hemarathana thero as all the religious proceedings were conducted under the supervision of Nayaka thero.