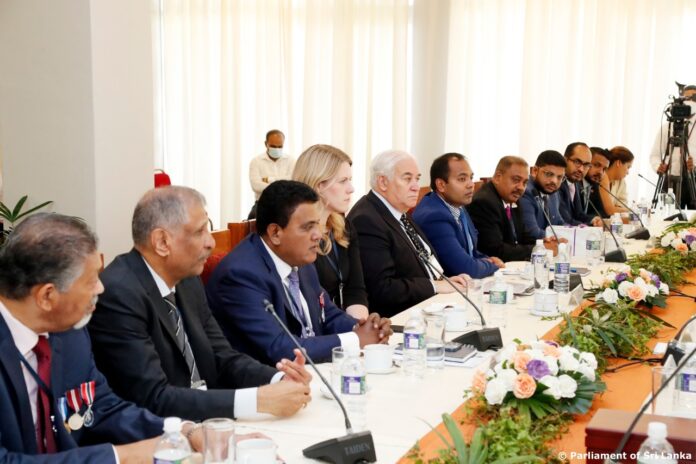 The Canadian business community accorded to support the development of Sri Lanka’s economy to overcome the economic crisis.

This was accorded at the meeting held today (03), between Hon. Mahinda Yapa Abeywardana, Speaker of Parliament and group of Canadian business leaders in Parliament. The Canadian business community said that they hope to increase the friendship with Sri Lanka and also expressed their desire to support the young entrepreneurs in Sri Lanka to build their enterprises.

Hon. Mahinda Yapa Abeywardana, Speaker of Parliament addressing the delegation, said that they will work expeditiously to bring about the development of the country. The speaker showed that the support of Canada’s business leaders is also important for this purpose and pointed out the need for cooperation between the two sides.

Furthermore, the speaker told the delegation present that an Overseas Sri Lankan Coordination Secretariat to help expatriates is in the process of being established in Sri Lanka and the necessary discussions are currently underway and that he hopes to get the support of each party for the purpose of economic development.

The Minister of Education and Leader of the House of Parliament, Hon. (Dr.) Susil Premajayantha was also present at this event and he pointed out the need to increase the friendship between the two parties. He also pointed out the need to involve the Canadian business community for the new programs that are expected to be established to develop the school system in this country.

Furthermore, the Secretary-General of the Parliament, Mr. Dhammika Dasanayake, also elaborated historical and geographical importance of the Parliament while having a friendly conversation with the Canadian Member of Parliament Hon. Rachel Thomas, who was present as part of the delegation.

The delegation also toured the parliament chamber during their visit.