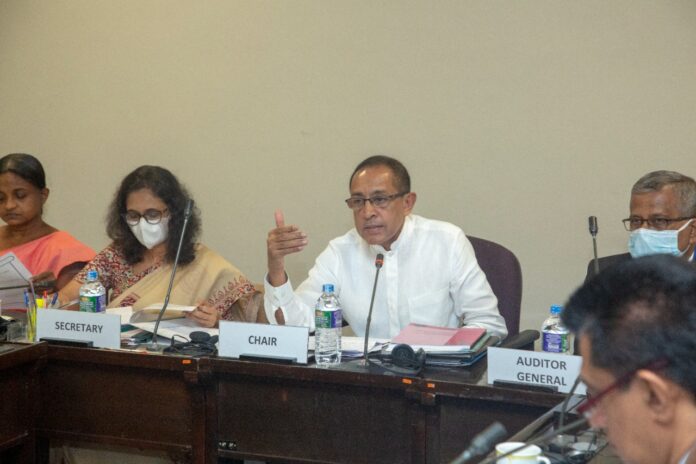 The Committee on Public Accounts (COPA Committee) directed the Ministry of Foreign Employment and the Foreign Employment Bureau to prepare a plan with a more efficient program to send more trained workers to foreign jobs in coordination with vocational training institutions. The said directions were given at the Committee meeting held recently (21).

The Committee on Public Accounts was held under the chairmanship of Hon. Kabir Hashim to examine the performance audit report on the evaluation of the role to be played for the quality development of the foreign employment sector.

Accordingly, the Committee chairman said that those institutions will be called before COPA again in the future.

The chairman of the Committee pointed out that although there is a great demand for skilled workers for foreign jobs, it is a serious concern that it is not possible to send skilled workers who meet the demand from the country and in 2021 this figure has reached low percentage of 33%. The committee pointed out that this is due to the lack of proper coordination between the relevant responsible institutions.

Thus, the Committee emphasized the need for the Ministry of Foreign Employment, the Foreign Employment Bureau to implement an efficient program with a new plan to train workers in the relevant fields paying constant attention to the new job markets in the world, together with the vocational training institutes in the country.

The Committee also drew attention to the fact that a national migrant labor policy had been prepared but was not implemented based on this. Thus, the committee emphasized that these policies should be updated periodically. Although the officials said that the work has been started, it appears that there is a delay and the Committee pointed out the need to operate with a specific plan and purpose as the basic arrangement related to sending foreign workers are in these policies.

According to an agreement between the United States of America and the Sri Lankan government in 2016, although there is space for qualified nurses in the country, it was revealed that out of a group of 425 nurses who had applied, only three nurses passed the relevant language proficiency test.

Furthermore, according to the agreements between the governments of countries like Japan, Korea and Israel, although there is scope for sending trained workers, it was revealed that the number of trained workers going abroad from this country is decreasing due to the decrease in the number of people with language proficiency and professional skills suitable for those respective countries. The Committee pointed out at length that these institutions including the Foreign Employment Bureau should operate to cater to these open job opportunities through the relevant ambassadorial relations and to train workers with professional skills.

At a time when the country is in an economic crisis, the Committee pointed out at length the need to identify and promote these foreign employment sectors as a source of foreign exchange earnings. For that, the committee emphasized the need for the research department within the Foreign Employment Bureau to operate more efficiently.