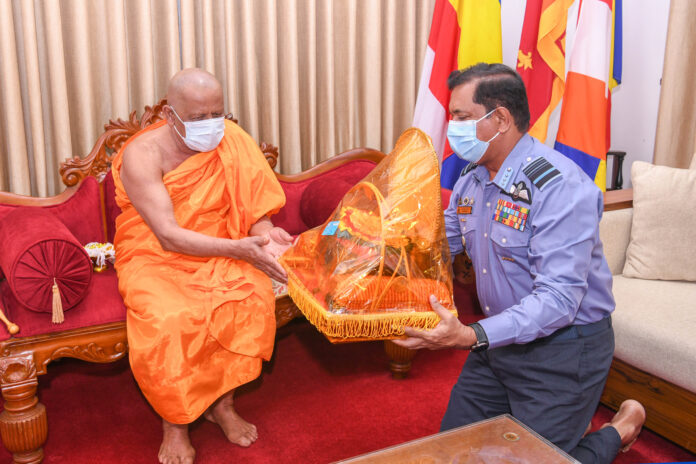 The Sri Lanka Air Force held its Annual Religious Ceremony and an Almsgiving at the Temple of the Sacred Tooth during the weekend under the patronage of the Commander of the Air Force, Air Marshal Sudarshana Pathirana to commemorate those of the Sri Lanka Air Force who made the supreme sacrifice. This event was organized by the Directorate of Welfare for the 12th consecutive year.

The Chairperson Seva Vanitha Unit, Mrs. Charmini Pathirana arrived at the Temple of the Sacred Tooth Saturday evening (22 October 2022) where religious blessings were invoked on all ranks presently serving in the Air Force, those who made the supreme sacrifice in the defence of our motherland and their families. The Almsgiving for 71 Buddhist Monks which prelates Chief incumbent Asgiri Chapter Ven. Warakagoda Sri Gnanarathana thero was conducted on Sunday (23 October 2022) under the presence of Commander of the Air Force, Air Marshal Sudarshana Pathirana at the Temple of the Sacred Tooth. The Commander also called on the Chief Incumbents of the Asgiriya Chapter and the Malwathu Chapter where they gave their blessings to the Commander of all personnel of the SLAF.

This year’s ceremony was attended by the members of the Air Force Board of Management, all Base Commanders and Commanding Officers, officers, other ranks and most importantly the family members of the war heroes who were killed in action.