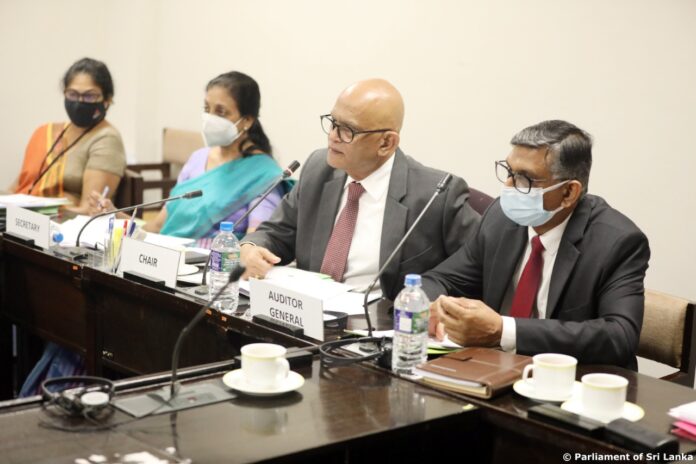 The Committee on Public Enterprises recommended to the Secretary to the Ministry of Lands Mr. Chulananda Perera to update the Land Reforms Commission Act and carry out the necessary measures to restructure its operations.

Accordingly, COPE recommended that a report be given within 6 weeks, based on the action taken in this regard.

These recommendations were made when the Committee on Public Enterprises met in Parliament last (21) under the chairmanship of Member of Parliament Hon. (Prof.) Ranjith Bandara to examine the Auditor General’s report for the year 2020 and the current performance of the Land Reform Commission.

Furthermore, the COPE committee discussed about the “2018 project to distribute 10,000 plots of land” and Hon. (Prof.) Ranjith Bandara, the chairman of the COPE committee, recommended that a detailed report on the progress of this be given to the committee. In particular, he recommended that the 214 people recruited on a temporary basis for this project should be discussed with the management department and a definite final decision should be taken to include them in the approved number of employees, and if necessary, they should be referred to the Cabinet for approval.

Furthermore, the COPE Committee recommended to include the procedure of the Land Reform Commission in a national policy on land distribution and make necessary arrangements.

Furthermore, the COPE Committee recommended that within two weeks, the Organic Fertilizer Project, which was initiated by the Land Reform Commission and has been temporarily paused at a cost of 350 million rupees, should be transferred to a state agency which has the knowledge of fertilizer products.

The missing files of the Land Reforms Commission were also taken into discussion and the COPE Committee informed the commission to immediately submit the missing files to the Auditor General.

The COPE Committee also recommended that immediate action should be taken to resolve the existing issues regarding the beneficiaries identified earlier under the statutory assignments.

COPE committee recommended to take action against the alleged company to recover the amount of 17 million rupees paid to a private computer company for the creation and development of a fully integrated computer system and to take disciplinary action against the officials involved in the matter.

Furthermore, the COPE committee also recommended to take legal action within two weeks to recover the amount of nearly 12 million rupees for the 6 acres of land assigned to a private company without a tax deed in the Homagama area. It was also instructed to inquire and report to the COPE committee regarding not making an agreement and charging 4% instead of 6% of the assessed value.

COPE recommended that disciplinary action be taken against the officials concerned for renting the building where the head office of this commission is run, exceeding the government assessment from the year 2016 without a rental agreement, contrary to the decision of the Cabinet and that immediate steps be taken to move the office to a government building.

COPE recommended to inquire into the relevant agencies regarding an investigation officer who is a lawyer who received two salaries and arrange to recover 1.7 million salary and other allowances and recommended action against that officer.