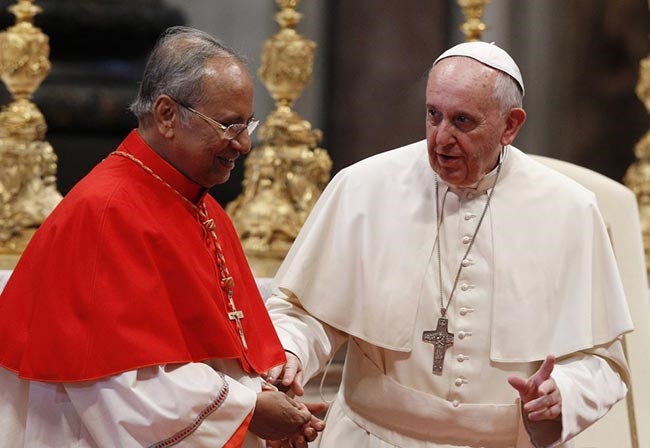 Colombo Archbishop Malcolm Cardinal Ranjith says that the need of the hour is the initiation of a high profile investigation to find out how this country was dragged down to its present plight of being a beggar nation, fix responsibility for these crimes and find ways to recover the money stolen from the people.

“People have a right to know how the foreign reserves that had been at around seven to eight billion US dollars had dropped to zero within two years,” the Cardinal said at the Feast of the Sacred Heart Mass at the Ragama Hospital Chapel last week.

He asked how the gold stocks in the Central Bank had disappeared and why were they wasted wasted irresponsibly.

“The disappearance of the gold will have to be investigated someday. People need to know who wasted this money,” Cardinal Ranjith said.

He said the country’s reserves were down to zero.

“Doctors working in hospitals find it difficult to come to hospitals on time due to the fuel crisis. We are with the people in their grief,” he said.

The Cardinal appealed to the international community to assist in providing Sri Lanka with medicines and equipment for hospitals amid its economic crisis.

“We urge Pope Francis to request the international community to assist Sri Lanka,” he said.

“We need to support the children’s hospital in Borella and the cancer hospital in Maharagama, especially for medicines and equipment.”

“People suffer without fuel and essential goods because of mismanagement. Children can’t go to schools due to the fuel crisis”.