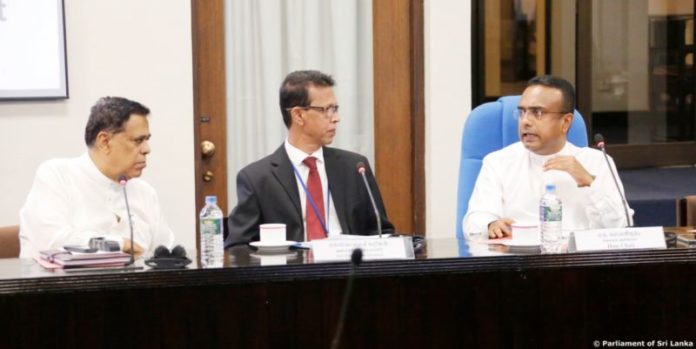 At present, according to the Industrial Disputes Act, in cases where an employer has terminated the employment of an employee, only the process finalization of such termination is dealt with under a Labor Tribunal. In cases where the employers do not agree or violate the provisions of various Acts pertaining to the Employees’ Provident Fund, wages, other terms and conditions, litigation will be instituted in the Magistrates’ Courts.

The main problem that arises here is that more than 16,000 cases have been filed in about 80 Magistrate Courts functioning island wide. It was also stated that it would take a long time for the aggrieved workers to get some justice and if the cases were referred to the 37 established tribunals island wide which are currently conducting very small proceedings, the aggrieved party would be able to expedite justice.

Therefore, it was emphasized that the Act would delegate the powers of prosecution to the Chairmen of Labor Tribunals. It was further stated that the Labor Tribunals had been given the aforesaid power in the past as well and that many cases could be settled expeditiously and those powers were later abolished.

He further stated that the Minister in charge of the subject will take steps to discuss with the trade unions the measures required to protect both the employer and the employee in the event of any factory closure due to specific economic conditions in the future.

The Bill was approved by the Ministerial Consultative Committee and will be taken up for debate at the next Parliamentary Week.

Thereafter, it was stated at the Consultative Committee that although special training programs for foreign employment are being conducted island wide which are currently receiving a lot of attention, such programs are not being implemented in the Jaffna District. Therefore, the Minister in charge of the subject instructed the relevant authorities to take immediate steps to implement language training programs in the Jaffna District.

Hon. Nimal Siripala de Silva, Minister of Ports, Shipping and Aviation was present at this meeting on a special invitation received from Hon. Manusha Nanayakkara, the subject related Minister. Deputy Chairman of the Committee Hon. Angajan Ramanathan and Hon. Jagath Pushpakumara and officials from the Ministry of Labor and many other government institutes were present at this committee meeting held.