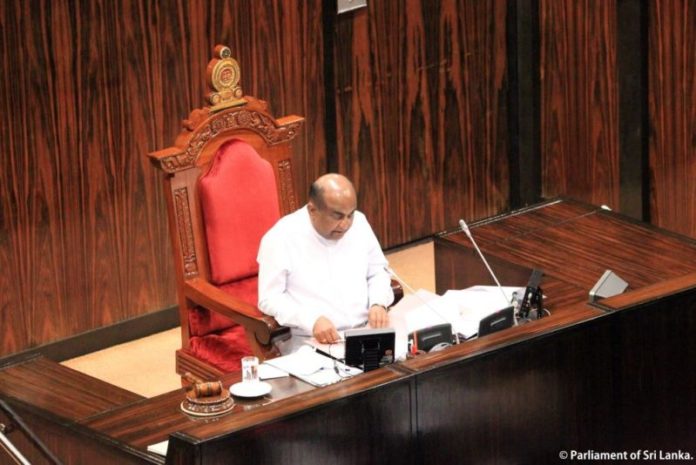 I regret to note that despite the various attempts made during the parliamentary debates on 05th, 06th and 07th April 2022 to find short-term and long-term solutions to the current crisis in our country through Parliament, no positive solution has been reached.

However, I would like to mention that further discussions were held on 05th and 08th April 2022 under my chairmanship with the participation of the Leaders of the Political Parties represented in the Ninth Parliament and the Members of the Committee on Parliamentary Business in view of the need to take some positive steps in this regard.

Accordingly, the Leaders of those parties and the Members of the Committee on Parliamentary Business met again in Parliament yesterday, April 18, 2022 to discuss the prevailing crisis situation further.

A number of party leaders also expressed the view that a new constitution should be drafted as a long-term solution to the current unrest among the people and the 21st Amendment to the Constitution should be passed by Parliament based on the urgent need to strengthen the power of Parliament as a short term as well as an immediate solution.

Attention was also drawn to a number of positive proposals that could fulfill the aspirations of the people in this crisis situation.

A number of proposals were discussed, such as amending the Constitution and related laws to subject  Ministers and Members of Parliament to the supervision of the Auditor General, make relevant amendments to allow the Auditor General to audit political parties, prohibit the procurement of goods and services without bidding for government contracts, amending legislation to allow the  government to seize assets which are found to have been illegally deposited in foreign banks or financial institutions by politicians and their relatives or public servants, prohibit dual citizens from being elected to parliament and the presidency.

Accordingly, as the Speaker, I respectfully request the active contribution and maximum support of all Members of Parliament, including party leaders, regardless of party affiliation, towards the objective of establishing a transparent and non-corrupt regime that prioritizes the well-being of the people as an effort to alleviate the current crisis in the country.