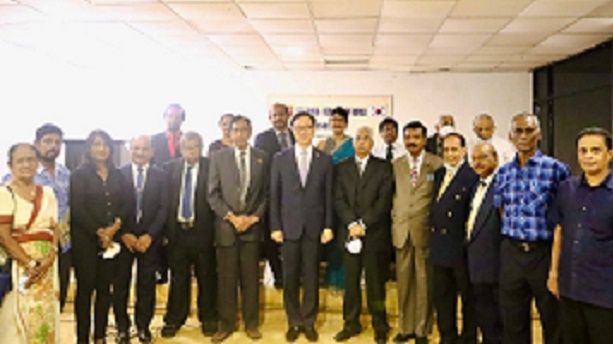 On 30th of March, Ambassador Santhush Woonjin JEONG attended the 50th Annual General Meeting of the Sri Lanka – Republic of Korea Association held in Colombo. The President Mr. Prasad Gunaratne and President-elect, Mr. Dudley Edirisinghe extended a warm welcome to the distinguished chief guest, Ambassador Santhush with a garland and stated that it is an honour to have the presence of the Korean Ambassador at this event.

Ambassador Santhush delivering his remarks congratulated the new executive committee and welcomed the revival of the Sri Lanka – Republic of Korea Association to further elevate our bilateral relations.

He stated, “In our 45 years of multifaceted friendship, we have taken our relations to a higher level. Korea and Sri Lanka share a robust, multifaceted friendship which continues to grow based on mutually beneficial cooperation in many areas of interest including culture, economy, health, education, labour and environment. Since my arrival as the Korean Ambassador to the Jewel of the Indian Ocean Sri Lanka in July 2020, I have tried my best to understand the vibrant cultural heritage, rich history and people of Sri Lanka.  Today, I am happy to say that not only have I taken up a Sri Lankan name but I have made good friends in Sri Lanka and visited beautiful Sri Lankan places throughout the last two years the revival of Sri Lanka-Republic of Korea Association is great news for the future of the friendly ties shared by our two countries. Moving forward, I am confident that you will play a vital role in taking our relations to new heights”.

The President Mr. Prasad Gunaratne appreciated the support of the Korean Embassy and especially the encouragement given by the Korean Ambassador H.E. Santhush Woonjin JEONG to host the AGM. He also resolved to work closely with the Korean Embassy to further strengthen the bilateral ties between the two countries.

The Sri Lanka – Korea Association was founded in 1971 and was helmed by eminent presidents. The former Speaker of Sri Lanka Parliament Hon. Karu Jayasuriya is a Vice-Patron of the Association.

At the 50th AGM, the President-Elect, Mr. Dudley Edirisinge was appointed as the new President of the Association. The delightful evening was filled with fellowship and amicable conversation.