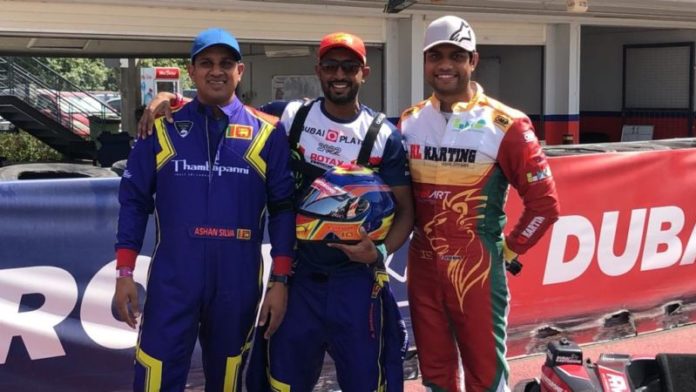 Anthony Shanouk Kirthisinghe, a product of St. Peter’s College, Bambalapitiya and a rising karting champion in the UAE.

Shanouk has always been passionate about sports and took part in sports such as swimming and cricket at St. Peter’s College where he represented the college cricket teams from under 13 – under 19. He was also a member of the SSC under 23 cricket team in Sri Lanka. Then, Shanouk proceeded to complete his higher studies in Aircraft Engineering and achieved his Master’s in Business Administration from the University of Bedfordshire in the UK. He is currently an employee of Emirates Airlines Engineering Department where he is also representing the Emirates Engineering cricket team.

Ayrton Senna once described go-karting as “the most breath-taking sport in the world” and advised to do it “with love and dedication”. Which is precisely what Anthony Shanouk kirthisinghe has being doing for the last 3 years.

Shanouk launched his karting career in Dubai with Emirates Group Karting Club in 2019 and went onto compete in the sprint races and won 4th place overall under the ‘Amateurs’ category out of 32 drivers for the 2019-2020 season.

The next season 2020-2021 he took part in sprint races under the ‘Professionals’ category and after being triumphant in several podiums and leading the championship till the race before last, by the end of the season, he managed to procure the 2nd place under his category out of 28 drivers.

In 2020, he also began participating in the annual Dubai Endurance Karting Championship in Team 2 of the Emirates Karting team under the ‘Corporate’ category.

As his flair for karting swiftly began to flourish, he was promoted to Team 1 which is the top team of the fastest drivers in the Emirates karting team representing Emirates Airlines under the ‘Corporate’ category.

From round 1 of the racing season , which started in February 2021 , they managed to win all the races and in the last 24 hour race round, which was in December 2021, Shanouk and his teammates were fortunate enough to share the track and race alongside former Formula 1 champion, Fernando Alonso, who took part along with his team. Shanouk along with his teammates, were victorious in concluding the endurance racing season as champions by achieving the 1st place under the ‘Corporate’ category.

Shanouk is also the only Sri-Lankan taking part in Sodi World Series (SWS) sprint races in the world.

In a recently held SWS sprint race, Shanouk managed to break the track record on international circuit layout at the World-renowned Dubai Kartdrome, with a lap of 1:10:230 (1 minute, 10 seconds, 230 milliseconds), which was previously held by World number 1 in Sodi World Series (SWS) by a lap of 1:10.670.

Furthermore, Shanouk successfully managed to organise a team comprising the top contenders in the field of Sri-Lankan motorsports, including Dilantha Malagamuwa, Ashan Silva, Eshan Pieris, and Yevan David. This amazing all-star team has been named as ‘Thambapanni Lions’, where they will go down in history as the first ever Sri-Lankan team to take part in an Endurance Karting Championship at the Dubai Kartdrome. The team has been sponsored by Thambapanni restaurant, which is one of the leading Sri-Lankan restaurants in the UAE.

On 26 February 2022, Anthony Shanouk Kirthisinghe along with international motorsports champions Ashan Silva and Eshan Pieris, took part in the season’s first Endurance race which was 12 hours long. Under tough international competitions, they successfully secured the second place under the ‘Nations Category’. This is the first and only Sri-Lankan team to compete in the Dubai Karting Endurance Championship, and they have managed to do it whilst keeping our Sri-Lankan flag flying high.

The team ‘Thambapanni Lions’ is currently 2nd overall in the UAE out of 34 teams and we wish them all the luck in the world as they undertake numerous karting endeavours around the UAE whilst continuing to bring pride and honour to our Motherland.