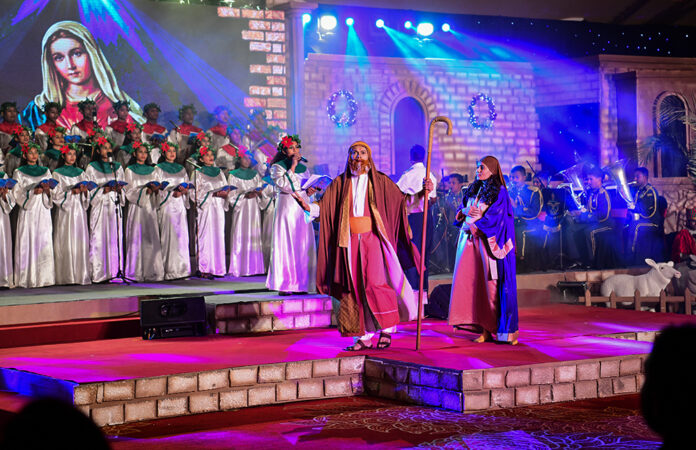 The Sri Lanka Air Force Christmas Carols – 2022 was held last Wednesday (21 December 2022) to spread the joy of the season with “Beautiful Star in Bethlehem”. On the invitation of the Chairperson of the SLAF Seva Vanitha Unit, Mrs. Charmini Pathirana and the Commander of the Air Force, Air Marshal Sudarshana Pathirana, this glittery event was held under the patronage of the Chairperson to the Defence Ministry’s Seva Vanitha Unit, Mrs. Chitrani Gunaratne together with Secretary to the Ministry of Defence, General Kamal Gunaratne (Retd) at the Eagles’ Lake Side Banquet and Convention Hall in Attidiya.

The Chief Guest was welcomed by Mrs. Charmini Pathirana and Air Marshal Sudarshana Pathirana at the entrance of the Eagles’ Lakeside and conducted through the holy Bethlehem atmosphere created for the occasion. This year the Air Force Choir under the supervision of the Director Performing Arts, Group Captain Lalith Sugathadasa was made up of members of the Directorate of Performing Arts and also children of Air Force Pre School SLAF Base Katunayake and children of Air Force Service Personnel. Squadron Leader Gayan Joseph was at the helm as the Choir Master. The event was hosted by Squadron Leaders Radhika Ranaweera and Squadron Leader Lilangi Randeni and the SLAF Dancing Troupe created the magic of Christmas by performing the colorful nativity scenes.

The Chief of Defence Staff, General Shavendra Silva and Mrs. Sujeeva Nelson, the Commander of the Army, Lieutenant General Vikum Liyanage and Mrs. Janaki Liyanage, the Commander of the Navy, Vice Admiral Priyantha Perera and Mrs. Mala Lamahewa, President Ranaviru Seva Authority, Major General Nandana Senadheera (Retd) and Mrs. Rekha Senadheera, Chief of Staff of the Air Force, Members of the Air Force Board of Management with their spouses, were among the distinguished invitees this year.