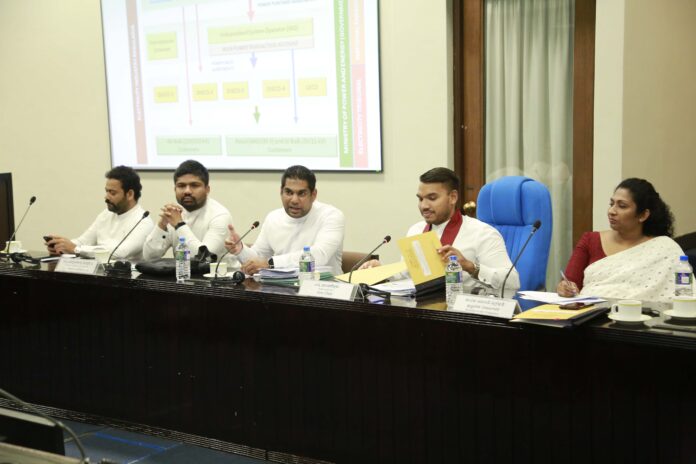 The Cabinet Appointed Committee Report to Suggest Reforms in the Power Sector was taken into discussion at the Sub Committee on Identifying the Priorities in Formulation of Short-, Medium- & Long-Term National Policies of the National Council.

The chair to the Sub-committee Hon. Namal Rajapaksa pointed out that during the restructuring, attention should be focused on simplifying the procedures to be followed by the parties involved in the tasks including electricity generation.

The chair of the sub-committee mentioned that it is hoped to establish a separate body for policy formulation not only in the power sector but also in other sectors and for that purpose. Thus, he further stated that the relevant legislation required for the said will be proposed to the National Council through the Parliament.

Minister Hon. Kanchana Wijesekera emphasized the need for a secretariat to operate until the restructuring of the power sector is completed. Furthermore, the committee chair pointed out that not only in the power sector, but in every sector, there should be provision to identify who the officers are and who are specifically responsible for the tasks and to remove them if they do not reach the required level of performance.

He also pointed out that although the people have the power to remove politicians in an election, there are no specific policies to take action against officials and institutions that do not show the required performance levels. Since the same issue can be observed in the electricity sector, the need to change the situation was strongly emphasized at the Committee meeting held.