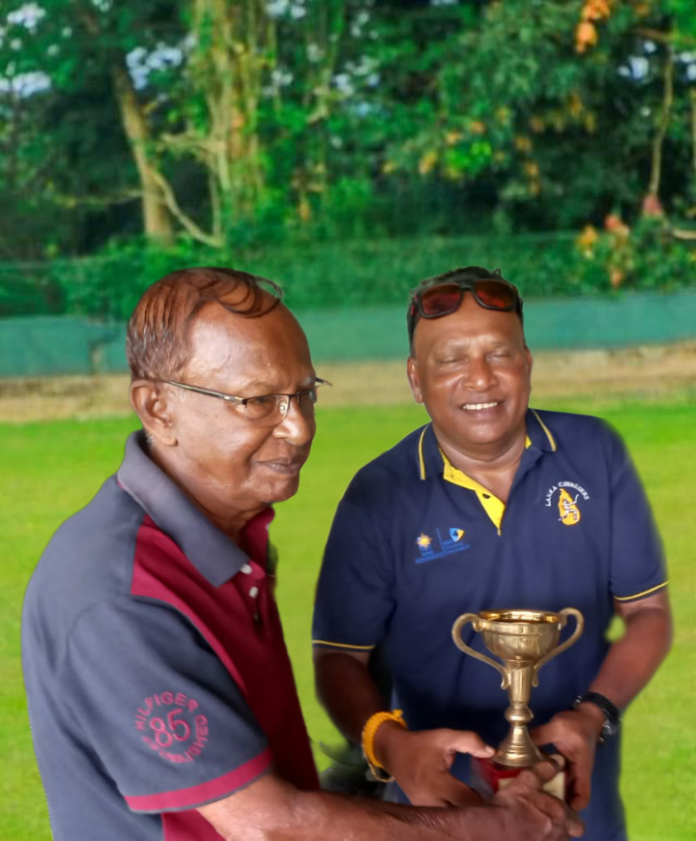 Lanka Cavaliers registered a thrilling win with 8 balls to spare against Legends of Richmond in a keenly contested Masters 30 overs Cricket encounter,  played for the Nihal Gunawardena Trophy at the Bloomfield ground on Sunday.

Lanka Cavaliers Skipper Nalliah Devarajan winning the toss and inviting Legends of Richmond to bat, openers Dilshan Amarasinghe and Asitha De Silva got them to a fine start with a 72 runs partnership and Manoj Perera claiming the wicket of Dilshan Amarasinghe at a time where the 2 batters were going at a rate of 8 runs per over with Dilshan Amarasinghe’s innings coming to an end stroking a solid 26 runs. Nalliah Devarajan coming into the attack got the wickets of the next 3 batters including Asitha De Silva,  who played a star studded innings stroking 64 runs and with his fine bowling spell got the run rate down. P.A. Gunawardena playing a magnificent innings and keeping the score board ticking was sent back to the pavilion of the bowling of Chaminda Rajapakse for 21 runs and S.T.R. Jayasekera stroking an excellent knock of 24 runs not out got them to a reasonable score.Nalliah Devarajan had the best figures of 4 scalps,  Chaminda Rajapakse with 2 and Manoj Perera claiming 1 wicket shared the bowling honors.

Lanka Cavaliers chasing this total,  openers Sujith Perera and Vajira Wijegunawardena got 31 runs on the board and with the dismissal of Sujith Perera and the next 2 batters Sriyan Hewawasam and Suranjith Dharmasena supporting with double figures and Vajira Wijegunawardena stroking a marvellous knock of 58 runs were at one stage reeling at 4 down for 119 runs,  batters Wasanthalal Fernando and master blaster Chaminda Rajapakse , the pair together took the score closer to the winning target , where they were needing 55 runs  ,unfortunately with the dismissal of Wasanthalal Fernando stroking an entertaining knock of 33 runs and the 5th wicket falling at 167 runs and Mahesh Wijenaike joining Chaminda Rajapakse took past the winning target with master blaster Chaminda Rajapakse playing a classic knock scoring 28 runs  not out , gave them a well deserved win.  Prasad Abeysundera was pick of the bowlers capturing 2 scalps .