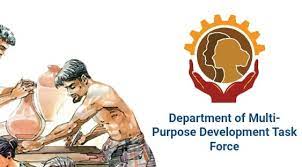 Following the instructions of Hon. President Ranil Wickremesinghe over 32,000 staffers enlisted to the Department of Multipurpose Development Task Force (DMDTF) for training appointments will be tendered permanent government employment consistent with their training, during the next year (2023), said the State Minister of Defence Hon. Premitha Bandara Tennakoon.

The concept of DMDTF was introduced in view of numerous accessible skills-based employment opportunities to the Government and Government affiliated institutions and DMDTF was established to provide Government employment prospects after proper training for those with marginal education qualifications of low-income generated families to uplift them from the low-income status and also to create a skilled labour force envisioning to build a prosperous country.

Accordingly, the services of about 32,000 officers who have been recruited so far are to be made confirmed.

The Minister of State for Defence mentioned that after filling the vacancies in the public service, the DMDTF will be disbanded.

The Minister of State for Defence further stated that amendments have been made to grant leave with pay for Multipurpose Development Assistants subject to a maximum of 2 days for medical reasons or acceptable reasons to the satisfaction of the leave granting authority.