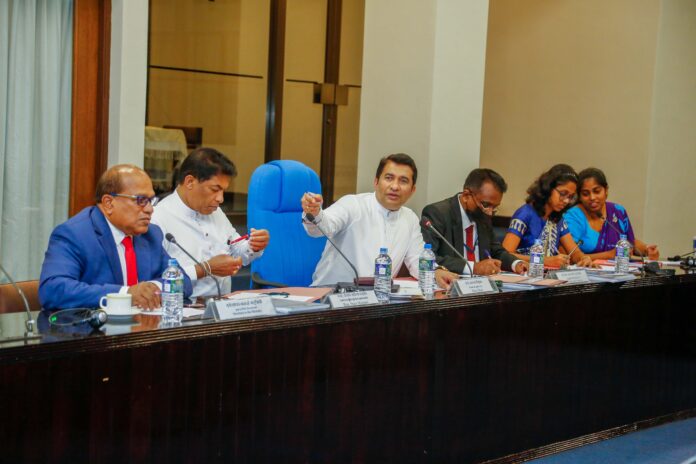 Hon. Roshan Ranasinghe, Minister of Sports and Youth Affairs instructed the Ministry officials to call for a written inquiry from the Sri Lanka Cricket Select Committee the reason for the non-inclusion of Chamika Karunaratne in to the National Team in the event that the player has become the man of the series in the last two cricket tournaments and having being ranked second in cricket rankings.

The Members of Parliament said that there is a speculation that when selecting players for the Sri Lankan cricket team, only players belonging to a certain religious group are selected, and there is a rumor that the cricketer Chamika Karunaratne, who has performed well in the past, was not selected to the national team because he did not agree with the particular religious ideology.

It was also expressed that officials who went abroad with the sponsorship of the Sri Lanka Cricket Institute to participate in the last Cricket World Cup should be looked into. The Members of Parliament also mentioned that an amount of 800 dollars per day has been paid to one person with all the facilities and non-officials have also participated in the trip receiving the same facilities. Furthermore, the councilors pointed out that a formal regulation regarding the use of money in conducting T20, T10 and LPL tournaments is necessary with the intervention of the Sports Ministry.

The Minister stated that Bellwood Aesthetics Resort will be developed as Bellwood Aesthetic Academy to provide the NVQ 6 internationally recognized certification. The Minister said that in addition to the existing subjects, steps will be taken to introduce new subjects such as acting, costume design, television and film production technology, and a studio complex with all the necessary technical equipment will be built and steps will be taken to upgrade it to the status of Hollywood and Bollywood film industries in 2023.

The Members expressed their gratitude for the minister’s attention and action on the concerns faced by the children of Bellwood Institute, especially pertaining to the lack of a full-time principal as well as food and transportation concerns.

The Minister also instructed the officials to immediately investigate the demolition of the 4-storey building on the 50-acre land where the Bellwood Aesthetics Resort is located by the then chairman during 2015-2019 and take legal action against it.

It was also discussed that the turf of the only international level hockey field in Sri Lanka is not of a standardized level due to lack of proper maintenance. The Members of Parliament expressed their views on the need to reorganize it and maintain it for the future of hockey. The officials mentioned that the Asian Hockey Federation has agreed to develop it on the basis that 50% of the financial contribution is made by Sri Lanka.

Furthermore, it was also expressed regarding the dilapidated synthetic track of the Diyagama stadium, and due to this, the Parliamentarians pointed out that apart from the Sugathadasa stadium, there is no track for the players to practice.

It was discussed that the indoor playground of the Maharagama Youth Council has become dilapidated due to getting wet during the rainy season as a result of lack of proper maintenance. The chairman of the Youth Services Council said that he is holding talks with the Japanese Embassy to renovate this building, which was built using Japanese aid and technology. The chairman also mentioned that the Minister has given instructions to use the income earned by the Youth Service Council for its maintenance.

It was emphasized that the provincial and regional sports are being destroyed due to the non-functioning of the provincial councils and the councilors also requested the attention of the minister as it has a negative effect on the emergence of players at the national level. It was also expressed that the Ministry of Sports should start a program to regulate the functioning of various sports federations across the country.

Views were also expressed about the possibility of inviting sports associations to the committee for discussion, and the chairman gave instructions to the secretary of the committee to carry out further procedures in this regard.