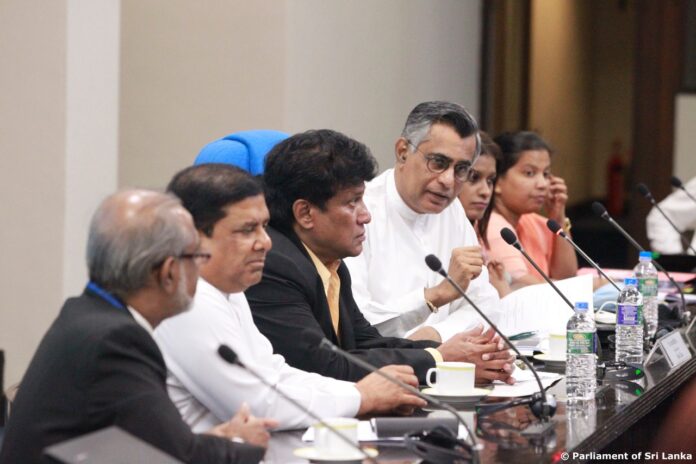 Chairman of the National Council sub-committee on identifying short- and medium-term programs related to economic stabilization Hon. Patali Champika Ranawaka, Member of Parliament stated that steps will be taken to present the new proposals for the improvement of the banking, insurance and business sectors in the country by next December.

The Chairman stated the above when the committee met yesterday (18) to discuss the contemporary matters arising in the country’s banking, insurance and business sectors.

The chairman said that there is a difficulty in maintaining business activities due to the current bank interest rates as well as VAT, other public taxes and taxes imposed on private companies and individuals.

Furthermore, there was a long discussion about the situation of Small and Medium Enterprises that have collapsed due to import control. The committee was made aware by the business community about the difficulties they are facing. Accordingly, facts were presented explaining how the vehicle importing sector, the construction sector and especially the tourism sector have collapsed.

The Assistant Governor of the Central Bank presented to the committee an explanation regarding the measures taken by the Central Bank to prevent the banking sector from being subjugated to a potential risk.

Thus, the chairman mentioned that there are several large-scale state banks and many well-run private banks in the country and trust is very important in running banks. Therefore, the chairman explained the need to protect the trust between the banks and move forward.

Furthermore, the Chairman asked the Central Bank, the Ministry of Finance and the banking sector about the steps taken so far in relation to the matters proposed by the Hon. President in the Interim Budget and the Budget for 2023.

Hon. Patali Champika Ranawaka, Chairman of the National Council sub-committee on identifying short- and medium-term programs related to economic stabilization, pointed out that the committee has planned to submit proposals to the Parliament to resolve the problems that have arisen in the said sectors due to the collapse of the country’s economy.

Members of Parliament Hon. Mano Ganesan and Hon. Wajira Abeywardana, representatives from the Ministry of Finance, the Central Bank of Sri Lanka, major public and private banks in the country, Bank Employees Association, insurance institutions, and private business sectors were present at this meeting held.