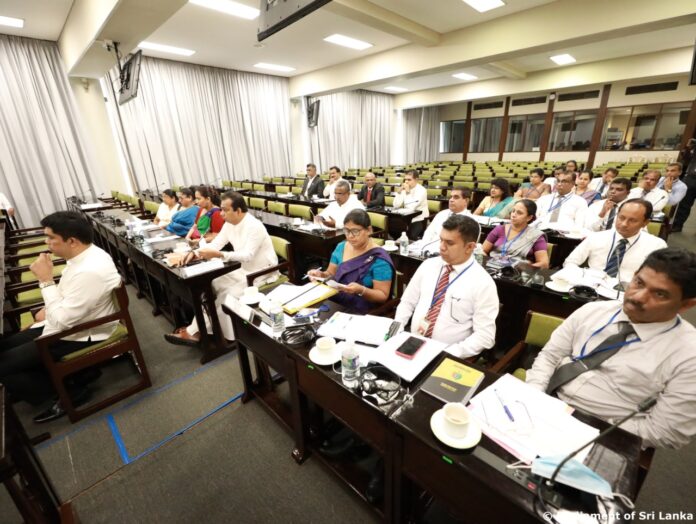 The aforesaid was stated at the first meeting of the Ministerial Consultative Committee on Foreign Affairs held recently (10) under the chairmanship Hon. Ali Sabry, PC, Minister of Foreign Affairs when the Members present raised the concern of the quality of the recruits of Foreign Service and the current status of the examination.

Members present raised concerns that many Sri Lankans are seen on pavements near foreign embassy entrances from morning till noon. The Members were of the view that it is not a pleasant sight and therefore a proper mechanism should be established to avoid the situation. The Minister stated that discussions have been carried out regarding the matter and it will be looked into as soon as possible.

Furthermore, explaining the array of tasks performed by the Ministry, Hon. minister stated that apart from the daily tasks, the Ministry of Foreign Affairs is also involved in looking into various concerned raised by the UNHRC and ways to domestically face such international concerns.

The Hon. Minister also stated that a lot of ground work is been done coordinating with foreign nations given the debt restructuring process.

Hon. Ali Sabry, PC explained the nature of services provided by the Foreign Ministry and highlighted during the weekend in its role in coordinating the efforts to rescue 303 Sri Lankan’s who were abandoned by traffickers in the middle of the sea. As well as providing consular assistance to cricketers Dhanushka Gunathilaka at the time of his arrest. Further he highlighted the Sri Lankan High Commission in London’s role during the world tourism forum to promote Sri Lanka globally. Thus, many of the work carried out by the Ministry of Foreign Affairs sometimes does not get enough publicity due to its nature.