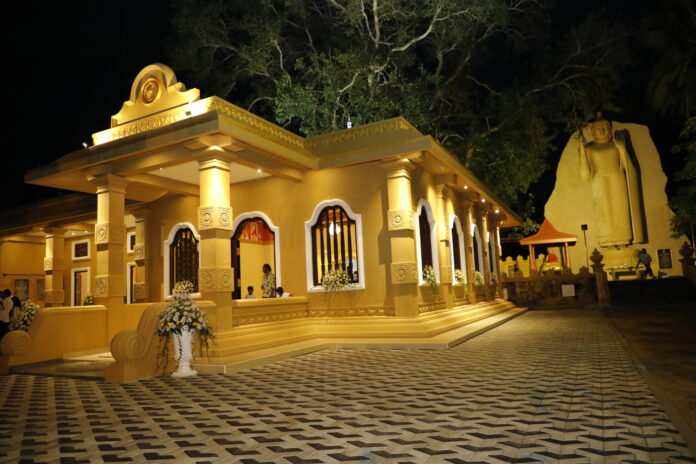 Defence Secretary General Kamal Gunaratne said that “As a part of the nation building process, we engage in restoration projects of sacred religious places also whenever possible.”

Addressing a gathering at the Palatuwa Baudodaya Pirivena in Matara last Friday (Nov 04), he also mentioned that “the restoration work of Mihindu Maha Seya in Mihintale, both Deegawapiya and Neelagiriya Stupa restoration projects in the Eastern Province and Construction of Sandahiru Seya premises in Anuradhapura are some of the work being carried out”.

Gen. Gunaratne expressed these remarks at the opening ceremony of ‘Shrine Hall’ and the ‘Buddhist Statue’ held at the Palatuwa Baudodaya Pirivena in Matara.

Speaker of the Parliament Hon. Mahinda Yapa Abeywardena and the Governor of the Southern Province Willy Gamage were also present at the event.

The Defence Secretary during his address also stated that the technical expertise and labour were provided by the Sri Lanka Army to accomplish this noble project.

Venerable Maha Sanga, philanthropists, members of the organizing committee, devotees of the Pirivena, residents and students were also present at the event.