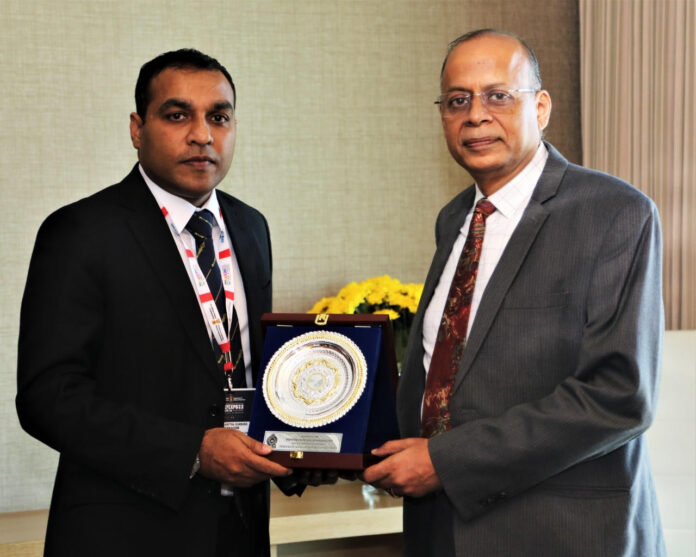 Highlights of the speech delivered by State Minister of Defence Hon. Premitha Bandara Tennakoon at the India’s flagship defence exhibition (DefExpo-2022) held at the Gandhinagar in Gujarat, India which was held on October 18 to 22, 2022

State Minister, in his address, states that the bilateral relationship between Sri Lanka and India could strengthen through maritime diplomacy, adding that we should strive to enhance maritime diplomacy across the Indian Ocean to converge with other oceans. This conclave would definitely help to address challenges both within and outside our boundaries. He Further, pointed out Defence Ministry of Sri Lanka has taken the timely initiative to provide a forum through the ‘Colombo Security Conclave’ to discuss how to strengthen regional security and stability.

The State Minister of Defence Hon. Premitha Bandara Tennakoon expressed these remarkes on Sri Lankan government’s behalf at the India’s flagship Defence Exhibition (DefExpo-2022) held at the Gandhinagar in Gujarat, India which was held on October 18 to 22, 2022.

Further speaking the State Minister said that “As an island nation which has historically fostered maritime cooperation and contact among countries in the Indo Pacific region, Sri Lanka welcomes the timely objectives of this Conclave” and said “Combined with the Defence Exhibition, this gathering of Defence Ministers of the IOR,recognizes the leading role of India in fostering collaboration to contain contemporary non-traditional security challenges in the Indian Ocean”.

He is of the view that “DefExpo 2022 helps to achieve India’s South Asia Policy of SAGAR by offering the military-technical tools for IOR states to deal with non-traditional security threats”.

He also emphasizes that the prominent feature of security policy in the contemporary world is the Defence Industrial Base adding that, as an emerging global power, India leads the region in formulating far-reaching security doctrines that may make the region a safer place and ensure its preservation.