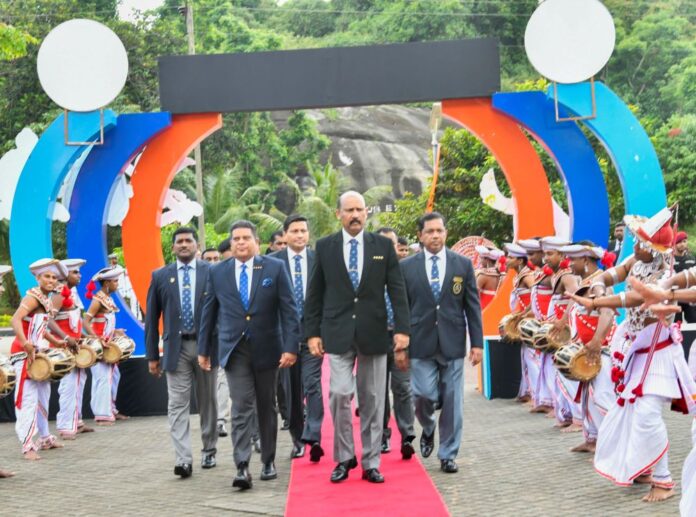 The 12th Defense Services Games, where the three armed services engage in sportsmanship, ceremonially commenced on Thursday the 19 October 2022 at the Sri Lanka Army Indoor Stadium in Panagoda with the gracious presence of Secretary to the Ministry of Defence, General Kamal Gunaratne (Retd).

The Ministry of Sports and Youth Affairs has recognised the Defence Services Games as the third-most significant sporting event of the annual sports calendar. The Defence Services Games, which have drawn particular attention among the major sports events held in Sri Lanka, will feature a large number of experienced athletes who have competed in national and international competitions as well as a significant number of novice athletes from the Army, Navy, and Air Force.

The Defence Services Games will begin on Wednesday the 26th of October 2022 and last through October of the following year, with a total of 39 sports; 36 sports disciplines under the men’s category and 32 under the women’s category and with the participation of more than 4000 men and women representing Sri Lanka Army, Navy and Air Force.

The quintessential outcome of these games is to promote comradeship among servicemen and women of the nation. It is a platform which serves to strengthen the bonds of friendship and harmony among the tri forces, in the arena of sports and on the fields of friendly strife and also to identify the new and talented athletes to represent the national and international sports competitions, at the same time, an opportunity to improve the own sporting skills of experienced athletes as well. The sportsmen and women of the tri-forces, who were born through Defence Services Games, won a significant amount of medals to the homeland throughout history at the global platform by possessing 272 medals from Sri Lanka Army, 40 medals from Sri Lanka Air Force and 30 medals from Sri Lanka Navy.