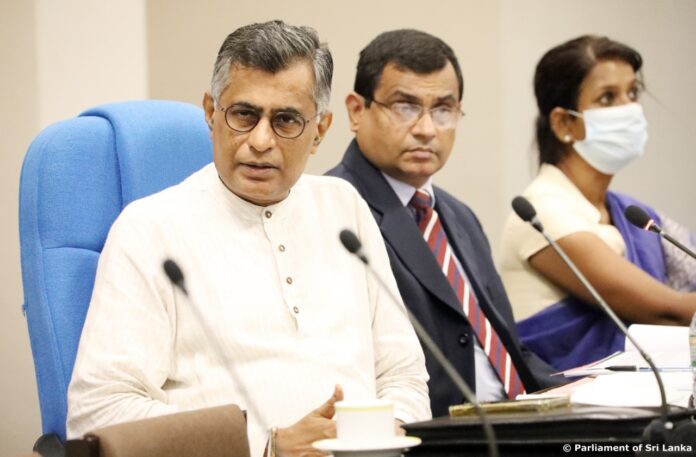 A digital platform will be set up to receive people’s opinion for the National Council sub-committee on identifying short- and medium-term programs related to economic stabilization, the Committee chairman, Member of Parliament Hon. Patali Champika Ranawaka said today (13).

He mentioned this when the sub-committee met in Parliament to receive opinions of experts.

Officials of the Central Bank of Sri Lanka, the Ministry of Finance and Prof. Rohan Samarajeeva were present in this meeting where the current debt situation of the country and possible policy situations in dealing with the International Monetary Fund (IMF) were discussed.

The Superintendent & Registrar of the Public Debt Department of the Central Bank of Sri Lanka Dr. M. Z. M. Aazim said that there will be some comforting change in the existing situation by the coming month of January.

The attention of the committee was drawn to the social pressure caused by maintaining the rupee against the dollar, increasing taxes, and imposing import restrictions in order to stabilize the economy. The committee also paid attention to the social problems caused by the collapse of small and medium scale industries, high unemployment, increase in poverty etc.

The Chairman informed the Ministry of Finance and the Department of Censors and Statistics to take necessary steps to conduct the survey of families in Sri Lanka immediately. The chairman also mentioned that since this survey has not been conducted for a period of three years, it will be more appropriate to understand the prevailing social situation and prepare future policies by conducting the survey.

The committee has also planned to submit a detailed report in December that includes proposals related to debt stabilization and various areas that are under pressure in some way due to the government’s negotiations with the International Monetary Fund.