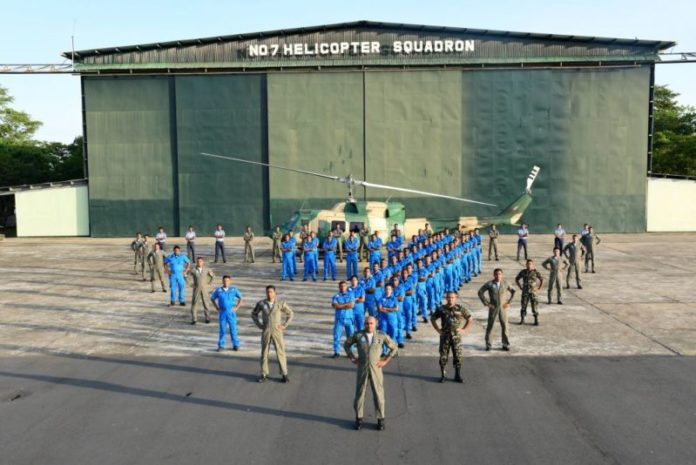 The No 7 Helicopter Squadron of Sri Lanka Air Force, also known as the “Cradle of Helicopter Pilots”, located at Sri Lanka Air Force Base Hingurakgoda holds an unbowed, unbroken and unbent reputation and a magnificent history from 1994 to date, by rendering 28 years of dedicated service to our motherland.

The Squadron was initially established as the No 401 Squadron on 23 September 1994 comprising of Bell 212 and Bell 206 Helicopters and was re-designated as the No 7 Helicopter Squadron on 23 March 1996. The undeniable role played by the Squadron paved the way to many victories throughout the war. Further, it keeps on assisting the nation with its aircraft fleet at the hour of need. For the record the squadron has amassed over 28,000 hours of operational flying which includes daring missions deep in to the enemy lines pushing its men and machines to the limits, conducting over 21,000 sorties during the time of separatist conflict during the civil war alone. As a fleet, by 2022 No 7 Helicopter Squadron has flown nearly 78,000 hours in total. Out of it, Squadron has conducted over 25,000 hours of training missions being the Alma mater by producing helicopter aviators with professionalism and valour. Further 545 hours of commercial flying and over 90 hours of VIP sorties in the operational area. In achieving this during the last three decades, there were “few” , 17 in number,  who never made it  back home and made the supreme sacrifice for the nation. In recognition of the esteemed services provided to the nation the Squadron was awarded the highest accolade a military organization could receive, the Presidential Colours on 02 March 2019.

At Present the Squadron is Commanded by Group Captain Sanoj Jayaratne and consists with Bell 212 and Bell 206 Jet Ranger helicopters along with 47 Officers and 165 Airmen. Apart from the bravery and valour shown during the past, the Squadron is further geared up to undertake a wider spectrum of air operations within the gamut of entire air power taxonomy, with available aircraft in the squadron fleet, keeping the professionalism and utmost intact to flight safety. The No 7 Squadron has been and will continue to stand ready 24/7 and 365 days of the year as a first responder whenever the nation is in distress, either, due to manmade or natural disaster to save lives and property. The role and task of the Squadron includes Combat SAR (Search and Rescue), CASEVAC (Casualty Evacuation), Air Transportation of troops/ cargo, Fire Fighting, CAP (Combat Air Petrol), CAS (Close Air support), MEDIVAC (Medical Evacuations), Underslung operations, HADR (Humanitarian Assistance and Disaster Relief), VIP transportation, Air Gunner tanning, NVG (Night Vision Goggles) training and most importantly Basic and Advance Helicopter training.

Marking the 28th Anniversary on 23 September 22, under the guidance and supervision of the Commanding Officer Group Captain Sanoj Jayaratne, the Squadron carried out a weeks long Community Service Project at Siriketha Primary School Hingurakgoda, which was a remote school around the vicinity of the SLAF Base Hingurakgoda.  Further, a ‘Bhodi Pooja’ and a “Pirith” chanting programme was also held at Buddhist Centre Hingurakgoda commemorating the fallen heroes of the Squadron and also to invoke a blessing on present squadron personnel and their families.