The Commander participated in a group photograph with the victorious teams and also presented the SLAF Sportsmen and women with special appreciation in recognition of their untiring effort and dedication displayed to hoist the National and SLAF flags flying high. 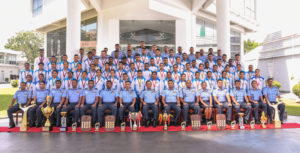 Additionally, the Commander of the Air Force, Air Marshal Sudarshana Pathirana promoted the National Netball player Leading Aircraftwoman Rashmi Perera to the next rank of Corporal in appreciation of her performance to achieve the 12th Asian Netball Championship.