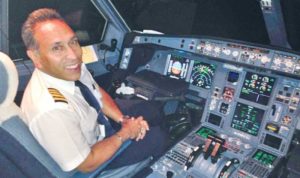 Veterans Cricket Australia will host this inaugural 60+ World Cup revealed Rod Rice, the President of Queensland Veterans who is also the tournament liaison official.
Peiris,  who is a pilot by profession has played Cricket in Sri-Lanka and had the distinction of Captaining the St. Thomas College team at the centenary big match against Royal College in 1979.  At this inaugural 60+ World Cup tournament, Sri-Lanka will also include players living in Australia, New Zealand and USA. The team will  comprise 5 players from Sri-Lanka including Johann Peiris,  11 from Australia, 3 from New Zealand and 1 from USA. The other 4 players from Sri-Lanka are Thilan Wijesinghe,  who has played for Ananda College and Captained the Sri-Lanka A team at National level and could play a pivotal role in this tournament.  Mahes De Zoysa,  who also played for Ananda College as a Wicket keeper/ Batsmen in 1972,  is a capable batter, who has played County League Cricket in England for many years.  Ajith Naranpanawe,  has played for Dharmaraja  College , Kandy and captained the College 1st XI team. Mahendra Arthanayake,  has played for Harischandra MV, Negombo and Maris Stella, Negombo,  an opening batter , where the Sri-Lanka team will be depending on him for a good start. All are members of Colombo Masters.
The 12 teams participating at this tournament are Australia,  New Zealand,  South Africa,  Zimbabwe,  India,  Pakistan,  Sri-Lanka,  Wales,  Rest of the World,  Canada,  USA and West Indies. England has dropped out as it would clash with the finals of the English County competition.
Johann Peiris ( Captain ), Mahes De Zoysa, Thilan Wijesinghe,  Mahendra Arthanayake,  Ajith Narampanawe ( Colombo  ), Gary Gunasekera ( Vice- Captain  – Melbourne), Dr. Sittampalam Ragavan , Andy Bhahirathan, Wasantha Hettiarachchi Nadarajah Gowripalam ( Sydney), Lal Wijesiriwardena ,
Neil Karunasekera ( Canberra), Brian Goonesekera, Suren Surendran , Sumedha Eratne ( Auckland), George Seneviratne( USA), Keith Carlyle Jansz, Shantha Gunasekera- Manager,  Prasanna Kariyawasam- Secretary,  Senerath A. Seneviratne- Admin, ( Australia  ).
The inaugural 50+ World Cup was held in Sydney in 2019. The second edition in Cape town in 2021 had to cancelled halfway due to the Covid 19 pandemic.  Sri-Lanka participated in both editions .