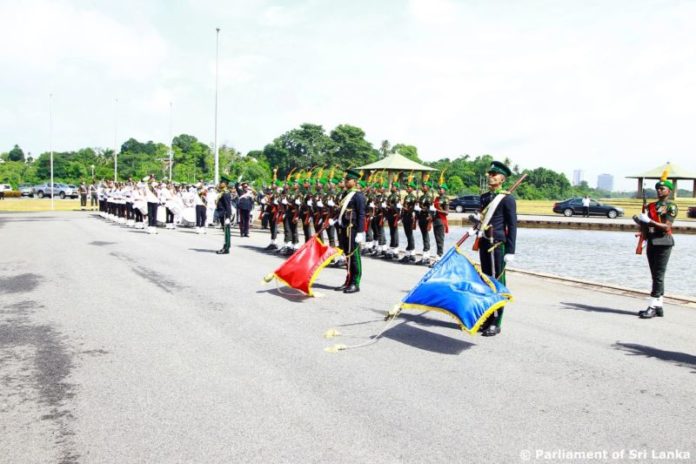 The ceremonial opening of third session of the Ninth Parliament is scheduled to be held tomorrow (03) under the patronage of the President, Hon. Ranil Wickremesinghe. The rehearsal pertaining to the ceremonial opening was held today (02) at the Parliament premises and officers of the tri forces and the police, students of Devi Balika College, Colombo were present.

Following the ceremonial opening of the new session, the President Hon. Ranil Wickremesinghe is scheduled to present the government’s policy statement tomorrow (03) at 10:30 a.m. in Parliament in accordance with the powers vested in him by Article 33 of the Constitution.

Given the instructions of the President, arrangements have been made to hold the ceremony in a very simple manner. Thus, there will be no gun salutes or car parades, Sergeant-at-Arms of Parliament, Mr. Narendra Fernando said.

Instead, the President will be received in front of Parliament with a Tri Force Guard of Honor. Here the President’s flag will not be hoisted and only the National Flag will be hoisted.

The Speaker Hon. Mahinda Yapa Abeywardena and the Secretary General of Parliament Mr. Dhammika Dasanayaka will be welcoming the President Hon. Ranil Wickremesinghe at the main steps of the Parliament building.

The students of Devi Balika College, Colombo will line up for the recital of Jayamangala Gatha at the main entrance of the Parliament Building in welcoming the President.

Following the presentation of the Government Policy Statement by the President, the House will be adjourned. Afterwards, a tea party has been organized for the Hon. Members of Parliament and invited guests.

A Guard of Honor will also be presented when the President and First Lady leave Parliament.

Mr. Narendra Fernando further mentioned that several officials including foreign diplomats, former Presidents, Prime Ministers, Chief Justice, Supreme Court Judges, Attorney General, Defense Secretary, Commanders of the tri forces and the Inspector General of Police have been invited to the ceremonial opening of the third session of the Ninth Parliament.

He also stressed that the third session of the Ninth Parliament will be ceremonially opened following all health guidelines.