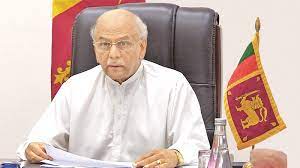 Dinesh Gunwardena was sworn in as Sri Lanka’s new Prime Minister a short while ago, in the presence of the President Ranil Wickremesinghe  at the Prime Minister’s Office in Colombo.

Dinesh Gunawardena was born on 2nd March 1949, had his education at  Royal College, Colombo. He received a Diploma in International Business from the Nijenrode Business University, Netherlands and a BBA degree in Business Administration and International Transport from the University of Oregon, USA.

Mr Gunawardena entered politics in 1973  through the Mahajana Eksath Peramuna (MEP) and was elected Member of Parliament for Maharagama 1983.

Since being appointed as member of Parliament he has held the following appointments:

He has also held positions of the Chief Government Whip and as the Leader of the House.