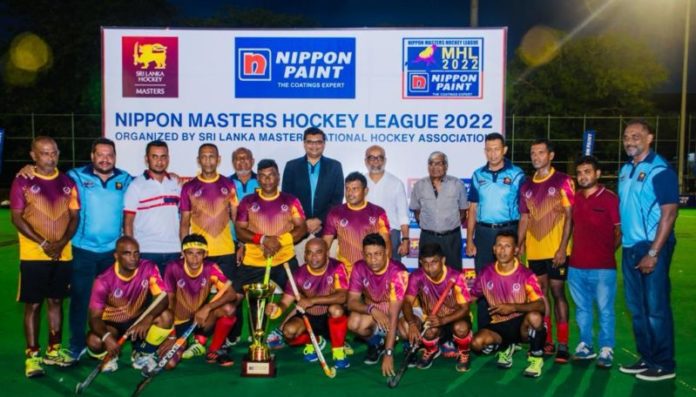 By M.H.Yakeem
Matale Legends beat CH&FC to win 2nd Masters Hockey League
Matale Legends led by former national player Palitha Weerasinghe beat Colombo Hockey and Football Club ( CH & FC ) to win the Cup final by 2-1 in the second Masters Hockey League tournament held at the Astro Turf on Sunday.
The tournament was organised by the Sri-Lanka Masters National Hockey Association
( SLMNHA) for the second time after a lapse of five years.
Matale Legends in group ” A ” beat Sri-Lanka Masters Gold ( 2-1) , Old Ben’s ( 3-0 ), Badulla Masters ( 1-0 ) and BRC ( 1-0 ) in the group matches before taking the unbeaten CH&FC team in the Cup final.
CH&FC in group ” B ” also won all the round robin matches beating Sri-Lanka Masters Maroons ( 1-0 ), CR&FC ( 1-0 ), OLD DS Sports Club ( 3-0) and Malays ( 2-0)
In the final which was played partially under flood lights,  Matale Legends got some solid chances,  but CH&FC defended well to end the to a scoreless draw.  The winner was chosen with a single series penalty and Matale Legends won by 2-1.
Premesh Cramer, former Sri-Lankan national and Army sticker, scored the winning goal for Matale Legends through the penalty stroke.
International hockey umpire Mahesh Abeywickrama and Damith Jayasena controlled the Cup final.
CH&FC centre half Thilina Perera was awarded the Lloyed Fredrick memorial trophy for the Player of the tournament.
The trophy was donated in memory of Lloyed Fredrick Colin Mariyanayagam, one of the founder members of SLMNHA and a member of Sri-Lanka Masters National Hockey team which represented Masters World Cup in Spain in 2018. The award was given by his wife Ms. Achala Fredrick.
Nippon Paint Lanka ( Pvt ) Ltd.,was the Platinum Sponsor for the second MHL, while Alpha Global Ship Services ( Pvt ) Ltd., and A & A Consultants Engineering ( Pvt) Ltd., were the co-sponsors for the tournament.
In the Plate final,  Sri-Lanka Masters Gold won by a solitary goal against CR&FC with Yohan Lewke scoring the goal from a penalty corner in the final seconds of the game.
In the Bowl final,  Badulla Masters beat Old DS Sports Club by 1-0
The 23 game  saw some of the most talented national players in the game who had done a yeoman service for the Country and the game at their young age,  when they represented Sri-Lanka.
Nemantha Abeysinghe,  the Group General Manager of Nippon Paint Lanka  ( Pvt ) Ltd., was the chief guest for the finals with Achala Fredrick as the guest of honor . The SLMNHA President Fowzul Hameed along with the chief guest gave away the awards , which was a well organised tournament.
Player of the                   Cup Champions
tournament Thilina        Matale Legends
Perera of CH&FC