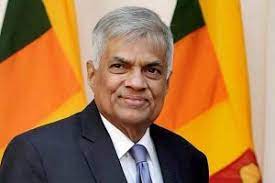 According to the Presidential Elections (Special Provisions) Act (No. 2 of 1981), Acting President and Prime Minister Ranil Wickremesinghe was elected today (20) by the majority vote of the Members of Parliament.

Accordingly, at the election which was held today (20) in Parliament, Hon. Ranil Wickramasinghe received 134 votes whereas Hon. Dullas Alahapperuma received 82 votes. Hon. Anura Dissanayaka received 03 votes. To be elected for the office of succeeding president, a candidate should get 50% or more votes from the valid number of votes. Hon. Ranil Wickremesinghe had achieved the requisite number of votes. Accordingly, the number of valid votes were 219 out of which Ranil Wickremesinghe had obtained 134 votes.

The number of votes cast were 223 and two Parliamentarians abstained from voting. 4 votes were designated as invalid votes. Accordingly, the Secretary General of Parliament, Mr. Dhammika Dasanayake announced to the House that Hon. Ranil Wickremesinghe is to be elected as the Eighth Executive President. Also, according to the Presidential Elections (Special Provisions) Act (No. 2 of 1981), the relevant gazette notification is to be published within 3 days.

Hon. Ranil Wickremesinghe is thus qualified to hold the office of the President for the remaining term of the presidency, which was left vacant with the resignation of the former President, His Excellency Gotabaya Rajapaksa.

Hon. Ranil Wickremesinghe was elected to the 9th Parliament on June 23rd, 2021 as a National List Member representing the United National Party.

He started his political career as the chief organizer of the United National Party in Kelaniya Constituency in the mid of 1970 and was later appointed as the chief organizer of the Biyagama Constituency. In 1977, he was elected as a Member of Parliament for the first time and was the youngest cabinet minister in the J. R. Jayewardene government where he held the position of Minister of Youth Affairs and Employment.

He was the Minister of Foreign Affairs at the age of 28, and later served as the cabinet minister for Youth Affairs, Education and Industry, Science and Technology.

Hon. Ranil Wickremesinghe, an alumnus of the Royal College of Colombo, was later selected to the Faculty of Law of the University of Colombo and sworn in as a lawyer.