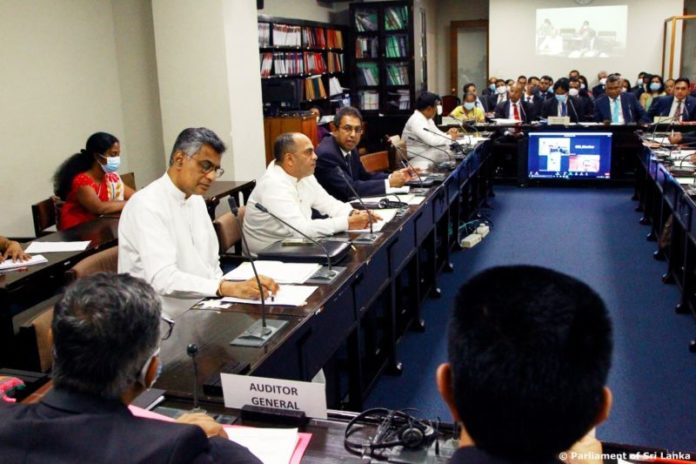 Investigate regarding the cancellation of the gas tender given to Siam Gas Company Limited and opting to purchase gas at a higher price – COPE Recommends.

COPE chaired by Hon. (Prof) Charitha Herath recommended that an investigation be conducted through the Auditor General’s Department on the cancellation of the Term Tender, which had been approved by the Cabinet to buy gas from Siam Gas at USD 96 per metric ton and opting to buy 100,000 MT of gas at a cost of USD 129 per metric ton from an Oman company.

This recommendation was given recently (05) when Litro Gas Lanka Ltd, Litro Gas Terminal Lanka (Private) Limited and Sri Lanka Insurance Corporation were summoned before COPE to implement the orders given by the previous Committee on Public Enterprises and to discuss the current performance.

It was disclosed that since the Term tender for the purchase of gas ended last February, tenders were invited for 2,80,000 MT of gas and three gas suppliers have submitted bids accordingly. Siam gas Company has submitted the lowest price as USD 96 per metric ton and accordingly the Cabinet has approved to award the tender.

The Litro officials disclosed that gas could not be obtained from Siam gas Company due to the economic crisis as banks in Sri Lanka were unable to submit the Standby Letter of Credit (SBLC) to Litro as per the conditions announced during the bidding process.

They further said that despite discussions with the concerned company in this regard, the company expressed its unwillingness to supply gas without a Standby Letter of Credit (SBLC) as per the conditions presented during the tender invitation.

Due to this delay, as a temporary solution, Siam gas Company itself has negotiated to obtain 15,000 MT of gas as emergency purchases, which is the gross amount of gas required for two weeks, but it has been informed that they can supply only 6600 MT and thus was unsuccessful.

Lito officials also said that the Oman company, which had sent prices at USD 129 per metric ton for the Term Tender, agreed to provide 100,000 MT of gas for 4 months at 25,000 MT per month.

Accordingly, after notifying the above facts to the cabinet, it was revealed that the term tender given to Siam gas Company was canceled and the cabinet approval was received for the term tender to purchase 100,000 MT of gas from the Omani company. A USD 70 million loan from the World Bank and 20 million of Litro Gas Lanka Ltd amounting to USD 90 million in total was used for this procurement, Mr. Muditha Peiris, Chairman of Litro Lanka said.

The COPE chair instructed the Auditor General’s Department to conduct a formal investigation and report whether the loan amount of USD 70 million from the World Bank was effectively used, and added that although the need for gas is a necessary emergency, buying from the Omani company at a higher price instead of the lowest bidder, Siam, may set a bad precedent in the future.

The committee also focused on the inability to purchase gas with the amount of USD 160 million allocated for the purchase of gas under the Indian Credit Line. The Litro chairman said that according to the conditions of the Indian government, it is a problem to buy gas that is not produced in the country. It was also revealed that several rounds of discussions have been held regarding this. The COPE Chairman recommended to the Secretary to the Ministry of Finance to look into this immediately and report within two weeks.

Attention was also drawn to the fact that the number of currently appointed members of Litro’s board of directors is only 4. It was revealed that according to the legal status, there should be 5 members. Furthermore, since the Ministry of Finance appoints the members of the Board of Directors, COPE pointed out the need to appoint the Board of Directors to consist of representatives of the parent company. The COPE Chairman recommended the Secretary to the Ministry of Finance to take necessary measures on this regard.

It was also discussed about holding both the positions of the company’s Chairman and Chief Executive Officer by the same person. Even if the position of the company’s chairman changes, the presence of a permanent chief executive officer position is essential for the good survival of the company, so the committee emphasized the importance of working towards it as soon as possible. Furthermore, Litro Chairman said that the Board of Directors has already taken a decision to deal with this situation as soon as this crisis is resolved. The committee recommended to take necessary steps and submit a report on this regard.