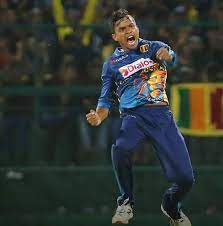 By : Nalin Jayetileke
Three uncapped at Test level players Maheesh Theekshana, Dunith Wellalage and Lakshitha Manasinghe have been called up for the second Test against Australia in Galle. Out of the three spinners at least  one is set to play on Friday. Lasith Embuldeniya has been left out from the squad with left-arm spinner Praveen Jayawickrama too out due to Covid-19.
The 19-year-old Wellalage, a left-arm spinner  who has played 11 first class games so far has 34 wickets to his credit and was the leading wicket-taker in the ODI series against Australia.
Right-arm spinner Theekshana who caused Australia problems during the white-ball leg of the tour though was not in the ranks taking wickets too is a strong contender for a slot in the 2nd Test where the wicket is expected to take a lot of spin.