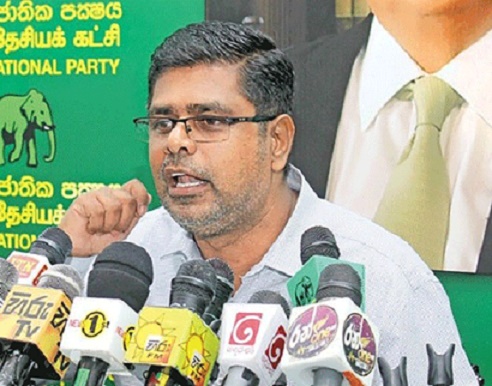 Top Samagi Jana Balavegaya spokesman Mujibur Rahman yesterday, June 29, said that having publicly admitted that his failure to address economic issues in a prudent manner had led to the current crisis, President Gotabaya Rajapaksa had no moral right to remain in office.

The Colombo District lawmaker told the media at the Opposition Leader’s Office that it wouldn’t be fair under any circumstances to continue the remaining period in office as he didn’t want to quit as a failure.

MP Rahman explained why the SJB would step up campaign against the President against the backdrop of the country acknowledging bankruptcy.

Referring to the then Finance Minister Ali Sabry’s recent declaration on a Swarnavahini interview that the President’s economic advisors, Treasury Secretary and the Governor of the Central Bank misled both him and the Cabinet of Ministers with regard to the economic environment, MP Rahman asked what action the government intended to take against them.

MP Rahman said that the entire Cabinet of Ministers, including the President should have resigned on May 19, 2022, the day the incumbent Central Bank Governor Dr. Nandalal Weerasinghe announced Sri Lanka wouldn’t be able to pay back its debts until it restructured them. Had that happened, a truly interim administration would have been able to address the issues in hand, MP Rahman said.

Responding to another query, lawmaker Rahman emphasized that there couldn’t be any uncertainty as regards the culpability for the ruination of the economy. Recent disclosures made at parliamentary watchdog committees, particularly the Committee on Public Enterprises (COPE) could be the basis for punitive action against former presidential secretary Dr. P. B. Jayasundera (Nov 2019-Dec 2021), former Central Bank Governors, Prof. W. D. Lakshman (Nov 2019-Sept 2020) and Ajith Nivard Cabraal (Sept 2020 to March 2022) and former Treasury Secretary S. R. Attygalle (Nov 2019 to April 2022).

The MP pointed out that the five-member Monetary Board, too, had been exposed and it would be the government’s responsibility to inquire into the happenings since 2019.

MP Rahman challenged the government to explain how it intended to address the contentious issue of accountability. The former UNPer said that the parliamentary watchdog committees headed by SLPP members had given enough ammunition to sink the government.

The lawmaker explained how the COPE proceedings had helped the Parliament to establish the truth regarding the primary reason for the current crisis. Dr. PBJ had been named as the one who decided to turn down the IMF call to restructure Sri Lanka’s debt if the government intended to secure its assistance, MP Rahman said, stressing on the responsibility of the Parliament to act on the information elicited at watchdog committee meetings.

Rahman asked the government to act on House findings without further delay.