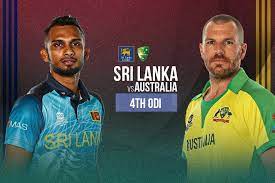 A fantastic display of one day batting by Pathum Nissanka and a well-structured and paced innings from Kusal Mendis saw Sri Lanka Chase down Australia’s score of 290 during the last ODI  to earn a 2-1 series lead. The 4th ODI of the 5 match series will get underway this evening at 14.30 hrs at  R Premadasa stadium.

In the last game the Sri Lankans showed maturity and paced the innings: to chase down their target with 6 wickets in hand and in the 48th overs. With this win and the one before in Kandy, the team is in high moral which will be the key for the game this evening at Premadas. Sri Lanka also had the chance of restricting the Australians for a lesser score if the two catches that went alongside Danajaya De Silva were grabbed which would have made it a much easier chase for the batters; However, a team that was somewhat struggling to get their act together in winning matches has now beaten the Mighty Australians recording two consecutive wins. With this backdrop Sri Lanka are all set to come out with all their guns blazing to fetch a win in today’s game to seal a series win.

The Sri Lankan selectors and the likes of former test cap Sidath wettimuny have repeatedly spoken about the class and stature of Kusal Mendis and what he can deliver which was testimony with his knock at the last game. However, it has been brought to light that Chief Selector Pramodya Wickramasinghe has highlighted  what the fitness requirements should entail in the  Sri Lankan Side especially when they are up against a fit side like the Australians.

Nissanka’s innings of 137; the highest against Australia by a Sri Lankan Batter was praised by many former Sri Lanka and international Crickets with most commenting on the way Nissanka paced his innings and how he together with Mendis approached the target at the end with not much fancy. Where the batters are concerned the players to watch form both sides would be Charith Asalanka (Av 47)  , Pathum Nissanka (Av 58.3), Dasun Sharnaka and Kusal Mendis from Sri Lanka and Alex Carey ( Av 30) , Travis Head (Av 78.5) and the experienced hard hitting Glen Maxwell for Australia. Players to watch with the ball would be Dushmantha Chameera, Jeffrey Vandasay and Chamika Karunaratne of Sri Lanka and Mitchell  Stark and Jos Hezlewood of Australia.

Australia however have had injury issues, have had to change players from time to time and struggling to strike a balance in the Team.

If Sri Lanka can go with the same kind of temperament and sprit as displayed in the last two games, making it 3-1, sealing a series win would not be an issue for the team.