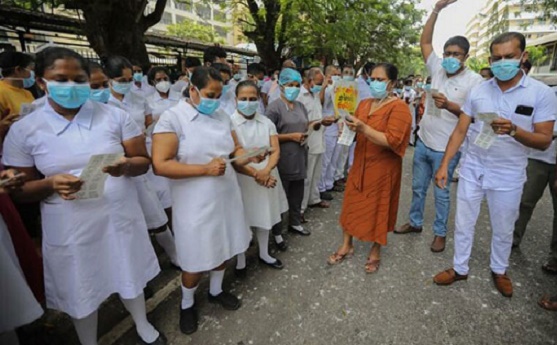 The All Ceylon Health Trade Union Federation (ACHTUF) had decided to launch a series of protests opposite main hospitals across the country from 12 noon on 20 June, ACHTUF General Secretary Mahinda Guruge said.

Guruge said that they were protesting against the reduction of health staff and allowances, the increasingly severe medicine and equipment shortages, transport issues that health workers faced and the drop in the standards of food given to resident patients.

“We will hold protests at all main hospitals. “We will also start educating patients on why we are protesting”, he said.

Guruge said that the mismanagement and lethargy of the government and officials of the Health Ministry had driven the unions to protest.

“Everything is in a state of collapse. The food we provide to elderly and children who are undergoing residential treatment is of subpar quality. We know that nutrition plays a big role in recovery. That is why we try to give a nutritious meal at hospitals. Now we often give them rice and coconut sambol”, he said.

Guruge said that most health workers from specialist doctors to minor staff found it difficult to travel to work for want of fuel. Gas stations did not offer health workers fuel on a priority basis despite a government assurance, he said.

“The government had declared health as an essential service, but how could people even come to work?” he asked.

Earlier this week, President of the Association of Medical Specialists (AMS) Dr. LakKumar Fernando reminded Health Minister, Keheliya Rambukwella that Health Ministry had not yet taken any practical and viable measures to ease the crippling effects of the current fuel crisis on medical specialists and other healthcare workers.

In his letter to the Health Minister, Dr. Fernando said that reaching the workplace has become a near impossible task for all medical specialists, and other healthcare workers, due to the worsening fuel crisis.

The lack of fuel not only affects routine work, but also makes it impossible for most health workers to return to hospitals, after working hours, in case of emergencies encountered in healthcare delivery.

“If health staff can’t make it to their workplace on time, this can have life and death consequences. When there is a medical emergency, one can’t go by bus or train,” he said.

Since there are no visible solutions to the fuel crisis in the near future, AMS will be compelled to advise our members to “work from home.” However, this will put many innocent lives in danger in certain instances, which is sadly due to reasons way beyond the control of health staff.